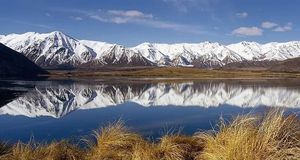 Lake Heron, one of the Ashburton Lakes. Photo: PHOTO NZ

They include the ear pond snail, which has quickly become widespread through many of Rotorua's lakes and has now also been found in the remote Ashburton Lakes in the Southern Alps.

Dr Clayton said the only way these snails, and other exotic fish and plant species, could end up in lakes in the first place is that they are released.

He said sometimes people get tired of looking after their aquariums and release the contents into the nearest water body.