The Department of Conservation says the Dart River in the South Island is flowing again following a major landslide at the weekend. 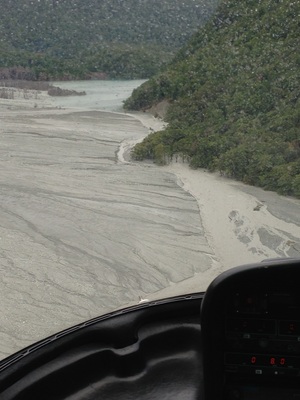 The river flowing over a band of silt. Photo: DART RIVER JET

The slip happened at noon on Saturday in an active slip area at Sandy Bluff, about 40km up the Dart River from Glenorchy, blocking the valley and forming a lake 3km long.

DoC partnerships ranger Chris Hankin said on Monday the valley walls at the bluff have been slipping for at least six months, but this is the biggest fall so far.

He said geologists from GNS Science have been at the site since Sunday and have found that the water is spilling over the blockage.

"GNS cautiously believe that there's no immediate danger that a large volume of water will suddenly be released down the river. It seems to have gone over the top and just slowly started flowing again."

Mr Rankin said section of the Rees Dart circuit tramping track remains flooded by the new lake and DoC is working to create a detour.

Jetboating and other activities on the river were suspended on Sunday as a precaution, but are restarting on Monday afternoon after being given the all-clear.

All trampers in the area are accounted for, but people should stay away until a track detour is put in.