Auckland councillors have censured mayor Len Brown, but stopped short of voting on whether he has their confidence.

There was harsh criticism of Mr Brown during a three-hour council meeting on Thursday for his breaching a code of conduct by failing to declare the use of nine free hotel rooms and 64 upgrades. This came to light following an inquiry into whether he used council resources during a two-year extra-marital affair. 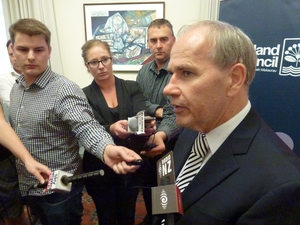 There was standing room only and constant heckling from a packed gallery with over 80 members of the public attending.

Mr Brown accepted the censure, which councillors decided by a majority was the harshest penalty they could impose for the breach.

Councillors voted 15 to five in favour of censure - in their words to maintain political stability and confidence in the governance of Auckland. A vote of no-confidence proposed by five centre-right councillors was not put, after it was ruled contrary to meeting rules.

Several councillors considered to have been strong supporters of Mr Brown remained silent.

Len Brown may face a hefty bill. A sub-committee of senior councillors will negotiate with him over contributing to costs incurred in the independent conduct review carried out by Ernst and Young. There are also legal costs and those of the Office of the Auditor-General who was consulted. All up, these could approach or exceed $200,000.

Councillor Dick Quax told the meeting it was crucial that Mr Brown pays back the cost of the inquiry. "And I do not care if it is quarter of a million dollars. The mayor owes it to the people - the ratepayers of this city and this region - to pay for the crap that he has caused."

Mr Quax said the mayor has totally compromised his office.

Mr Brown was booed on his arrival at the meeting and left when the debate about him began, as per protocol, before returning. He later told reporters he is comfortable with the "fair" outcome of the meeting.

"There's nothing else that could come out in terms of my conduct. What has occurred over the last nine weeks has been absolutely traumatic for my family and for myself. So it is now time for us to be focused on going forward into the future."

On Wednesday, Mr Brown said he was staying in office after Auckland newspaper the Herald, a group of protesters and five of his councillors called for his resignation.

Councillor Christine Fletcher says Len Brown's image is tarnished and he won't last. She said she is angry and affronted by his actions and told other council members that Thursday was about holding him to account on a serious matter.

Earlier, she told Radio New Zealand's Nine to Noon programme the situation raised major questions about why the legislation surrounding the Mayoral Office is so weak. She said because of the way the office is set up under law, there is a lack of accountability.

"For any mayor in the future, we must ensure that their staff are fully scrutinised and that there are measures of accountability not dissimilar to the office of the Prime Minister within parliament with a parliamentary select committee, going through and making sure those accountabilities are in place."

Councillor Cameron Brewer told the meeting that Len Brown no longer has judgement, honesty or credibility. He said Mr Brown has to go because he can't do his job and it's what the people are calling for. Mr Brewer said they are being subjected to a leader who has no integrity.

Denise Krum had called for the mayor to stand down. "Placing a little plaster like censure over a gaping wound will not bring about healing. We've got to win the hearts and minds of people, folks. And that's a hard ask with 100 percent trust in leadership. But now we find ourselves in a culture of questioning, of innuendo and of mistrust."

Businessman Michael Barnett said on Thursday he would run for mayor if the position became vacant. Mr Barnett, head of the Auckland Chamber of Commerce, said he is concerned that the situation is holding the city back. Should Len Brown resign, there would be an election in April 2014.