Auckland mayor Len Brown says he is staying in office after a day in which a major newspaper, a group of protesters and five of his councillors called for him to resign. 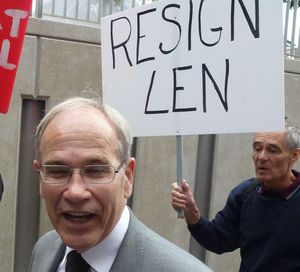 It began with a front page editorial in the New Zealand Herald on Wednesday morning calling for him to step down. Hours later, protesters pursued Mr Brown outside the Town Hall, waving placards and heckling him.

The mayor is under pressure after an independent auditor's review found that he had accepted but failed to declare personal use of nine free hotel rooms and 64 upgrades. This came to light following an investigation into whether Mr Brown used council resources during a two-year extra-marital affair with Bevan Chuang.

Mr Brown said on Wednesday the Auckland-based newspaper and the protesters are entitled to their views, but he is not resigning and asked for understanding that allows him to get on with his job.

"I've given very clear apologies to the community for what has occurred in recent weeks, and all I'm asking for now is their forbearance and an opportunity to continue to do the work we've done over the past three weeks."

The Herald says councillors have started an assault on the mayor's office, which could leave the city without a leader with independent authority.

If the council sets up some kind of oversight committee to control the mayor, the Herald says it would drag Auckland back into partisan and parochial stand-offs. It believes the only way that can be avoided is for Len Brown to step down.

Meanwhile, the mayor was continuing business as usual and made no comment on the editorial. He kept an interview appointment on student radio station Bfm, where he spoke of how tough the past few weeks have been for him, and visited a factory as planned in west Auckland. 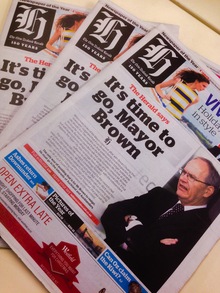 The mayor will face councillors in public at a council meeting on Thursday and is expected to be censured by some who disapprove of his failure to declare nearly $40,000 of free and upgraded hotel rooms.

Separately, deputy mayor Penny Hulse has been trying to get councillors to agree on a censure motion, including a call for Len Brown to discuss who should pay the $100,000 cost of the auditor's review.

Wendy Whittaker organised Wednesday's demonstration and accepts that the councillors are limited in what they can demand of Mr Brown.

"I don't believe that there any other avenues open to the councillors. Under the current framework that the super-city has been set up under, there really isn't a lot that anybody can do. There's a gaping hole in the legislation."

PM says it's up to mayor

Prime Minister John Key said it is up to Len Brown, his family and the Auckland Council as to whether or not he stays on.

"In the end, it is totally a matter for Len, his council and his family ... he's directly elected by the people of Auckland. The council's obviously going to take whatever steps that they feel necessary tomorrow, but in the end I'll leave all of them to reflect on it."

Mr Key didn't think legislation should be changed to give councillors more ability to rein in the mayor, saying that would be wrong. He said those powers allow the duly elected mayor to function and the Government is going to work with that person.