The Taranaki Regional Council says it is no longer allowing fracking waste to be spread on farms in the region. 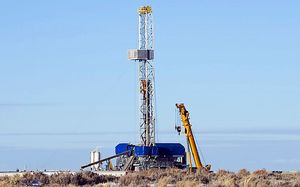 Fracking involves pumping fluids under pressure into rocks deep underground to get at trapped pockets of oil or gas. Photo: 123RF

Fracking is the mining process that involves high-pressure injection of water and a cocktail of chemicals far below the earth's surface to access oil and gas.

The council says it is following the lead of Alberta in Canada and implementing international best practice when it comes to landfarming.

While the North Island council says it is following the Canadian example, it has allowed fracking waste - known as frack-flow-back fluid - on at least one of its 12 landfarms, whereas Alberta forbids the practice.

The regional council says the landfarm in question in Waitara is now closed but the consent remains in place as the soil has not returned to acceptable limits for agriculture.

The council says its policy now is that the disposal of frack-flow-back fluids is best suited to deepwell injection.