Trade Minister Tim Groser is urging caution on a World Trade Organisation agreement saying it is a modest deal and provides limited direct benefits for this country.

The agreement was reached at the Indonesian island of Bali on Saturday after marathon negotiations between trade ministers from 159 nations. It simplifies trade procedures and also makes it easier for the poorest countries to sell their goods by reducing export barriers and allowing such nations more scope to use subsidies to safeguard food supplies. 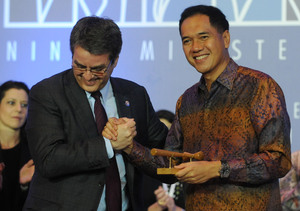 International Business Forum executive director Stephen Jacobi says exporters' goods will be fast-tracked through international customs as the facilitation part of the deal cuts down on red tape for traders.

Mr Groser says the deal shows key players are willing to make significant compromises to sustain the system but the agreement falls short of the global free-trade goal championed by the WTO since the Doha round of talks began in 2001.

He says in order to move forward further, WTO member countries must address issues relating to agriculture, such as the livelihood of farmers and global food security.

The Council of Trade Unions says the agreement is one for multi-national corporations, not the world's poor.

CTU economist Bill Rosenberg says the deal does not satisfy the long-term needs of developing countries, such as food security and agriculture.

He says the agreement heavily favours trade facilitation for developed countries, and corporations which want to increase their markets around the world.

Mr Rosenberg says no matters of direct interest to New Zealand were discussed at the conference.

The deal marks the WTO's first global trade agreement since it was created and follows years of failed attempts to secure the required unanimous approval from all its members.

One sticking point had been India's insistence that it should be allowed food subsidies because of its massive programme for stockpiling food to feed its poor. An eventual compromise was reached, so that rather than the permanent exemption from the WTO rules India wanted, the final text aimed to recommend a permanent solution within four years.

The negotiations nearly came unstuck at the last minute when Cuba said the deal did not do enough to press the US to lift its trade embargo on the island, but eventually agreed to accept the wording of the agreement.

The agreement slashes red tape at customs around the world, gives improved terms of trade to the poorest countries, and allows developing countries to skirt the normal rules on farm subsidies if they are trying to feed the poor.

Ministers had gathered with a clear warning that failure to reach agreement in Bali would turn the WTO into an irrelevance and trigger a rush towards regional and bilateral trade pacts, Reuters reports.

It came almost 20 years to the day since a similar nail-biting conclusion to another marathon negotiation - the talks to agree the creation of the WTO itself, which wrapped up in mid-December 1993. That was the last global trade deal.