Thousands of botanical enthusiasts queued up at the Auckland Domain's Wintergarden on Sunday to see - and smell - one of the world's largest flowers.

One of the world's rarest flowers is in full bloom at the Auckland Domain Wintergarden - and producing its signature rotting flesh smell. 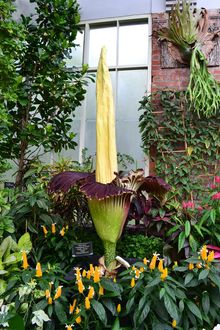 Despite the odour, more than 100 people queued on Sunday morning to get a glimpse of the Titan arum in flower. One woman described it as stunning and said it was worth the wait of many years.

The Wintergarden extended its opening hours to accommodate extra interest in the rare sight.

The 2.5-metre high Amorphophallus titanum, also known as the corpse flower, is from the Sumatra forest in Indonesia and blooms once every seven to 10 years.

Its smell is strong enough to spread for two to three kilometres, attracting insects the plant needs to pollinate it.

The Wintergarden team leader, Melanie James, says staff felt like expectant parents while waiting for the flower to bloom.

"It's like we were waiting on a birth, and we were almost getting impatient with it."

She says the plant can weigh up to 140 kilograms.

The huge flower bud began opening about 2pm on Saturday. The spathe, a leaf-like structure surrounding the central spike, had fully unfurled by Sunday, showing its deep burgundy interior.

The smell was likely to intensify as the day progressed and the temperature in the glasshouse rose.

Mr Millward says the flowering is very special as the plant blooms only once every seven to ten years, and flowering typically lasts for up to two days.

"We may never get another flower from it. That's that unpredictability of them and again - coming back to why it's so special - no one actually knows when they're going to flower, they have a mind of their own."

Garden opening hours were extended to 8.30pm on Sunday.