Teachers' views of national standards in reading, writing and maths have been tainted by their rushed introduction, a lead researcher at the Council for Educational Research says.

The council has published a survey showing more teachers oppose the standards than support them, and most believe they have caused a lot of work for little gain. 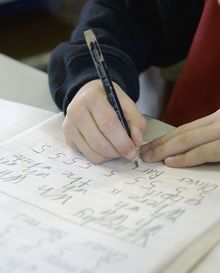 Nearly 900 teachers and principals responded to the survey and only 7% of principals and 15% of teachers agreed the standards were robust.

Among teachers questioned, 36% supported the standards in principle, 40% did not and 21% were not sure or neutral.

Lead researcher Cathy Wylie said teachers were ambivalent about the standards because of their hurried introduction three years ago, and the teachers and principals were not convinced they were robust.

Dr Wylie said the Government needed to reshape the standards and should start by dumping the system of labelling children as below, at or above the benchmarks.

But Ministry of Education deputy secretary Lisa Rogers said the latest survey had some heartening results and she did not agree that national standards were failing to work.

The study comes in the same week as reports which said the standards were doing more harm than good, and that most Year 8 students were behind in writing and science.

A report for the ministry, released on Wednesday, showed pupils in their final year of primary or intermediate school were falling behind in writing and science. The National Monitoring Study of Student Achievement tested 2000 Year 8 students in 2012 and found most were below the level of the curriculum expected for their age in the subjects.

A Waikato University study paid for by a teacher's union and released on Thursday said national standards in reading, writing and maths are overall doing more harm than good and recommended reporting school results should stop.

Education Minister Hekia Parata questioned that research, saying the findings supported the position that teacher unions already wanted and ignored the real achievements of the system in prompting the teaching of literacy and numeracy through an engaging programme.

But Educational Institute president Judith Nowotarski stood by the study it commissioned and said the Government must act on the findings of it and the other two reports.

"It's very important that these reports are taken note of. They come from three different perspectives so you can't ignore the fact that there is enough evidence built that it's having a strong impact on the education of our youngest children," she said.

The Educational Institute had funded the Waikato University study but it was robust, Ms Nowotarski said.