A bird species previously thought to be extinct, may still be alive.

The Ornithological Society, which monitors the status of rare and endangered birds, says the sighting of the South Island kokako is genuine. 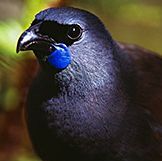 The bird was spotted by two men near Reefton in 2007. The Royal Forest and Bird Protection Society says that prior to this sighting, the bird has not been officially seen since 1967.

The orange-wattled kokako - a separate species from the endangered blue-wattled North Island kokako - was declared extinct in 2007. That has now been upgraded to "data deficient" as more information is needed to confirm the song bird's status.

The Reefton sighting was one of 11 possible sightings submitted to the Ornithological Society, AAP reports.

Two others were considered sightings of a tame North Island kokako, while the others from the Marlborough Sounds, northwest Nelson, the West Coast and the Catlins in South Otago, were considered "possible" or "probable" sightings.

Forest and Bird has funded a project by member Alec Milne to find out if it still exists. Advocacy manager Kevin Hackwell says it would be fantastic if the project's work confirmed that the kokako is alive.

"We can't say that the South Island kokako is still alive. But this is the best sign yet that it is."

Mr Hackwell said the biggest threat to the birds if they were still alive would be rats, stoats and possums, and called for more pest control work in the South Island.

Forest and Bird say this is a reminder that more pest control work still needs to be undertaken in the South Island than ever before.