KiwiRail is asking the Government to help pay for the cost of replacing the broken-down Cook Strait ferry the Aratere.

The company has still not worked out what went wrong, but is adamant it has not cut corners on maintenance of the ferry which lost one of its propellors near Tory Channel on 5 November. 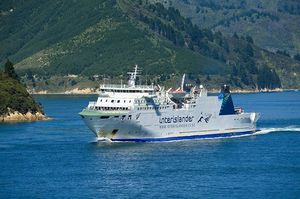 The company's chairperson, John Spencer, says there will be a substantial cost to KiwiRail after a shaft broke on the Aratere, sending the propellor to the bottom of Cook Strait.

Mr Spencer says he has already alerted the Government that the company will need more money, but as yet he doesn't know how much.

"Till we know the numbers, I'm not prepared to speculate. But obviously, we're going to sit down with the Government and see what the solutions are."

Meanwhile, KiwiRail's board meets on Friday and the company's chief executive hopes it might be in a position to decide on a replacement ferry.

However, Jim Quinn says that will depend on whether staff are able to gather all the information they need before the meeting.

Mr Quinn says the earliest another ship could be sailing the Cook Strait would be at the start of January, but it is likely to be later.