The commission says systems error meant about 31,000 claims out of 154,000 in the past three years were unintentionally excluded in the sample for its quarterly nationwide satisfaction. 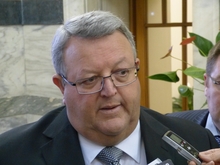 The EQC said an internal check confirmed the presence of an automated flag in the claims management system which meant customer claims were not included in the sample, but said the glitch did not affect the survey.

It said the 'do not survey' flag was added to claims automatically where there was a duplicate in the system or where an issue had been raised such as a complaint.

Mr Brownlee on Thursday refused to comment on whether EQC chief executive Ian Simpson's job was safe but told reporters he is extremely unhappy about what has happened.

"I've asked the State Services Commissioner to conduct a full inquiry and he'll be reporting to me in the next couple of days on how that's going to be progressed. It's one of those things that I think goes to the heart of confidence and I'm very, very annoyed about it."

Bryan Staples is a former EQC assessor from Christchurch who now advocates on behalf of its customers. He says the admission supports his claim that the agency manipulated a recent customer satisfaction survey in the city to show an 80% approval rate and change is needed.

The Auditor-General has previously criticised EQC for the way it communicates with customers, its complaints procedures and the speed with which it deals with homeowners.

Labour MP Clayton Cosgove said the commission has clearly been weeding out people who made complaints to make its data look favourable and this is totally unacceptable.