Police have increasing concerns about the number of people still texting or using hand-held cellphone while driving.

A new survey by AA Insurance shows that texting while driving remains the number one distraction for New Zealand motorists. 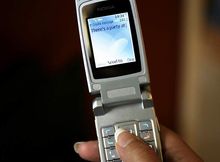 The poll of 1000 drivers aged 18 and over indicates that nearly 20% of people surveyed say they still send text messages while driving, despite a law change in late 2009.

Drivers aged under 34 most often flout the anti-texting law, while women are twice as likely as men to text while driving.

Talking on the phone is also a big distraction, with 18% of the drivers surveyed saying they still often use their mobile without a hands-free kit.

Other distractions include reading a newspaper or magazine, personal grooming such as applying make-up or shaving, adjusting the music or GPS system.

"If you talk to people caught texting or using cellphones, a lot of them know they shouldn't do it. They accept it's a risk, but find a reason in their mind why they can safely do it at that point. And there is no safe point - the message from us to them is don't do it, it's risky."