The world's first disability-adapted tall ship to sail around the globe has set off from Auckland's harbour on the next leg of its voyage.

The three-masted British vessel, The Lord Nelson, is part-way through its 23-month maiden round-the-world voyage and its first New Zealand stop was in Auckland. 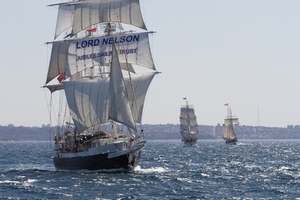 The 18-sail, 22-tonne ship is designed to cater for people with all types of physical disabilities, with features on board including wheelchair lifts, a talking compass and a hearing loop.

People with and without disabilities are crewing the vessel at different stages of the trip, each of which can last between five days and two months.

Captain Chris Phillips said the welcome in New Zealand so far had been fantastic and he is hoping for good sailing and a few nice weeks cruising around the coast.

Those joining the 50-strong crew to sail around New Zealand include a serviceman injured in Afghanistan, an Albany man with motor neurone disease and a Bay of Plenty teenager who is blind.

Former soldier Kyle Baker is on his sixth voyage. He was 18 when he was shot in the back during an ambush in Afghanistan in 2009 that left him with brain damage, and problems with his heart and the nerves in his legs.

He says being on the ship reminds him of being back in the military and helps him physically and mentally.

"The one thing I do miss about the army is cameraderie, and what you have on the ship is exactly what I miss. Everyone's here to help each other but you have a laugh and a joke with it as well.

On Monday the The Lord Nelson joined other tall ships in Auckland's harbour, before setting sail round the New Zealand coast. It is due to stay for a night in Napier on the way to Wellington where it is expected to arrive on 4 November.