Some 315 passengers and crew were on board a Ganz Mavag train heading into Wellington on 20 May when it derailed just north of the capital's main station. Four passengers were treated for minor injuries after an air compressor was forced up through the floor of the rear passenger car. 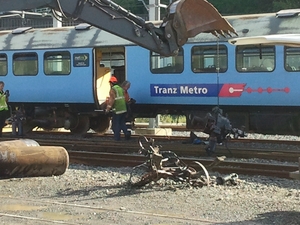 Mangled pieces of the train are removed at the Wellington station. Photo: RNZ

The commission says the train may have crashed because two pins were left off parking brakes during maintenance at its workshop in Wellington.

In its preliminary report released on Thursday, the commission says one engineer didn't tell the next shift where he had got up to with the pins and KiwiRail had no check sheet to fill in.

The commission says that mistake happened, even though it warned KiwiRail to improve its maintenance procedures in Auckland in 2007, and it is disappointed that those changes weren't adopted in other workshops throughout the country.

The report says passengers heard scraping sounds for some time before the derailment in May and a section of disc pad from a parking brake was found on tracks eight kilometres from the accident site.

The commission's chief accidents investigator, Tim Burfoot, says it appears the crash happened because the pins were left off the train during maintenance. That would have allowed the parking brake assembly to work loose, fall and derail the train.

"So we looked a little bit wider and that's when we found, actually, there was a general lack of documented procedures and no identification of critical systems on a train, such as the braking system. So it wasn't just this one job that failed, we saw that there was a potential problem with the procedures in general in the maintenance workshop."

The commission has made an urgent safety recommendation to KiwiRail to tighten its maintenance procedures and has asked the New Zealand Transport Agency to make sure that the company complies.

"That's not a duck - I just literally don't have enough data around that. What we do know is that we've made a mistake in this case. We've checked that and we're checking to make sure those checklists exist."

The inquiry into the Wellington derailment is expected to be completed in 2014.