Prime Minister John Key is confident the SkyCity convention centre deal will proceed despite a Crown Law opinion that a future Government could walk away from the agreement without paying compensation.

In July this year, a deal was signed under which SkyCity would build a $402 million convention centre in Auckland in return for being allowed to expand its gambling operation. 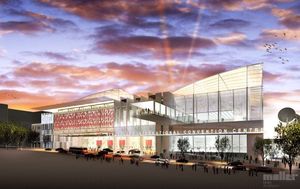 The bill that would allow the deal, which is now before Parliament, includes a clause that means future governments would have to compensate SkyCity if certain gambling laws were changed.

However, the Commerce select committee's report includes advice from Crown Law that a future government could simply pass legislation to override that provision.

John Key said he accepts a future Parliament could change the law but he does not believe Labour would do that. He said Labour was "already telling SkyCity they won't".

Mr Key said SkyCity, however, has to be aware of the risks.

Labour Party leader David Cunliffe said Mr Key is wrong and no assurance has been given to SkyCity. He said his party reserves the right to make changes to legislation to deal with problem gambling.

"That contract cannot be gold-plated, because there is no way under our constitution that a future parliament can be fettered. So therefore, people entering into that contract do bear some policy and

Mr Cunliffe will not say what Labour would do, but the Green Party says it would repeal the legislation.

Economic Development Minister Steven Joyce told Radio New Zealand's Morning Report that any government is sovereign and can make a decision to override a previous contract, but does not do it.

"They know that nobody would want a contract with a government if that was the cavalier approach of the government of the day."

Labour MP Trevor Mallard said he wanted the advice on the record to ensure that SkyCity understood exactly what could happen.

SkyCity says it accepts that its deal with the Government over the convention centre could be overturned by a future Government, but is also calling on MPs to respect the sanctity of contract law.

In a statement on Tuesday, SkyCity said if the deal goes ahead, it will be spending $400 million in return for regulatory concessions. It said the convention centre would drive tourism growth and generate jobs at no expense to the taxpayer.