Teenage singer Lorde has taken the top prize at this year's Silver Scroll awards, which celebrate the nation's best songwriting.

The 16-year-old's song Royals took out the 2013 Australasian Performing Right Association Silver Scroll Award after receiving thousands of votes from songwriters and composers. 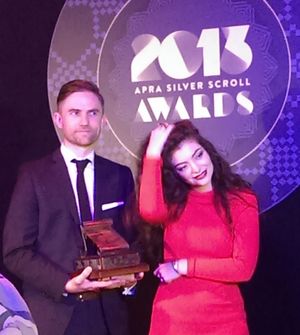 The chart-topping song was co-written with producer Joel Little.

Lorde told the audience she is new to the industry and appreciates that everyone has accepted her into it.

The song Ruaimoko by Maisey Rika won the Maioha award for te reo while the SOUNZ award for classical composition went to Karlo Margetic for his piece Lightbox.

The winner of the award for the piece of New Zealand music played most here and overseas went to Brooke Fraser for Something in the Water.

Much of the evening was spent devoted to singer/song-writer Dave Dobbyn, who has been producing music for nearly 40 years.

He was welcomed into the New Zealand Music Hall of Fame with tributes and a standing ovation.

Dobbyn is the 13th artist to become part of the Hall of Fame, which already includes Shihad, Jordan Luck and the Topp Twins.

He says he is humbled to be honoured in this way.

"This is a pretty special night and it's special for everyone I know that I've ever been involved with in the business," he says.

Dobbyn says he takes the honour with the dignity it should be taken with.