Many rural areas have seen a decline in population but New Zealand's population has grown by 5.3% since the 2006 census, with Auckland the main attraction.

Figures announced on Tuesday by Government Statistician Liz MacPherson for the 2013 Census show Auckland's population jumped by 8.5% over the past seven years to 1.42 million people - the equivalent of Tauranga's population. 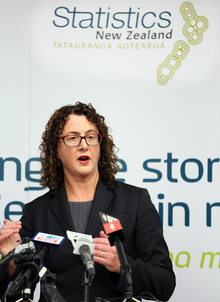 Thomas Lumley, a Professor of Demography at the University of Waikato, says Auckland is responsible for just over half of the country's population growth, growing by more than 110,000 people since 2006.

The fastest-growing district in the North Island was Carterton, which grew by 16% to more than 8000 people, according to the latest census.

Hamilton confirmed itself as the fourth largest city in the latest figures. The population now stands at 14,1615, some 12,000 more than in the 2006 census. The city has 21,369 more people than the next largest city, Dunedin.

Tauranga is ranked the second-fastest growing district or city area in the North Island. From 2006 to this year, its population grew by about 11,000, or nearly 11%.

However, in Rotorua, Whakatane, Kawerau and Opotiki districts the populations fell by between 500 and 600 people.

Taranaki was the third-fastest growing region in the North Island with 5% growth. The population has been bolstered by 5000 people since the 2006 census, mostly led by growth in New Plymouth. The region's population is now nearly 110,000, making it the 10th-largest in terms of population.

In the South Island, the fastest-growing districts were Selwyn, Queenstown Lakes and Waimakariri.

After Auckland, Nelson was the fastest-growing region, followed by Waikato, while Southland turned around a declining population to grow by more than 2000 people since 2006.

Figures from the latest census reveal Nelson has 46,437 people, up by 8% from the last census. Neighbouring Tasman's population has increased by 6% to 47,157.

The Queenstown Lakes District's population has increased by almost 23% to nearly 29,000 people. Mayor Vanessa Van Uden says the figures from the latest census simply reinforce what the council already knows - that Queenstown remains a highly desirable place to live and visit.

Despite Christchurch's earthquakes, Canterbury's population grew between 2006 and 2013, up by more than 17,000 people. However, the number of people calling the city home dropped by 2% to about about 341,000.

Areas near Christchurch have grown, as have places further afield, such as Ashburton and Hurunui.

The Waimakariri District mayor says displacement from the quakes is the main reason the district's population has spiked and Christchurch's has dropped.

The 2013 Census shows the Selwyn and Waimakariri districts increased by 32.6% and 16.7%, respectively.

Waimakariri mayor David Ayers says there about 1000 new building consents processed in 2012, which is one of the highest figures in New Zealand. Mr Ayers says it's looking like there will be that number again this year.

The director of the Population Studies Centre at Waikato University, Professor Natalie Jackson, says one of the most striking revelations in this census is the uneveness of growth.

Ms Jackson says Auckland took nearly 52% of the growth and 11 of the other 12 cities were responsible for 24%. She says that means nearly three-quarters of the population growth can be accounted for by cities, while the remaining 25% is spread very thinly.