The Corrections Association says a leaked document shows the company which runs the private Mount Eden remand prison is pressuring staff to work in unsafe conditions. 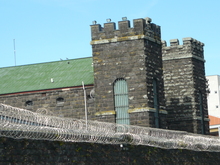 Many guards are refusing to stay in their designated area when working alone, but the document says they must not leave and "any deviation from this position will not be tolerated".

Corrections Association national president Beven Hanlon says the document shows the pressure staff are under to comply with a directive.

"Anyone who doesn't follow it, it's serious, it won't be tolerated. What that's saying is that if you don't follow this instruction I'm giving you, you will be dismissed."

Public Service Association national organiser for prisons Graham Cuffley predicts the staffing ratio, and an insistence staff stay in the unit by themselves, will have dire consequences.

"We're most certain that something will happen unless it's resolved. We're equally worried that a similar staffing model is proposed by this company for the Wiri high security prison.

"It's completely unsafe, it gives you no spare capacity whatsoever."

In a statement, Serco says claims that staff have refused to work in units because of safety concerns are incorrect and Mount Eden is one of the top three prisons in the latest Department of Corrections performance table.