The Judicial Committee of the Privy Council in London has quashed Mark Lundy's convictions for double murder and ordered a retrial in the New Zealand High Court, in a decision released at 9pm on Monday NZ time.

The 54-year-old has been serving a life sentence for killing his wife Christine Lundy, 38, and their daughter, Amber, seven, at their home in Palmerston North 13 years ago. 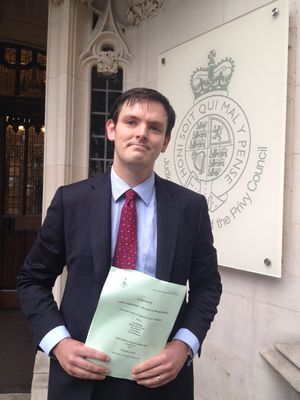 He was arrested six months later and jailed for 17 years after being found guilty of the murders.

In 2002, the Court of Appeal threw out his case and increased his minimum non-parole period to 20 years.

The Crown's case at the trial was that Mr Lundy drove from Petone in Lower Hutt to Palmerston North and back in three hours and committed the murders in that time.

He was arrested six months later and jailed for 17 years after being found guilty of the murders. In 2002, the Court of Appeal threw out his case and increased his minimum non-parole period to 20 years.

Mr Lundy has always maintained his innocence and the Privy Council in London heard a three-day appeal against the convictions in June.

Mr Lundy's legal team submitted that the time of death was established by examination of stomach content - a method it said was internationally discredited as bad science.

The options for the Privy Council were to quash, uphold Mark Lundy's convictions, or order the case sent back to the High Court in New Zealand for a retrial.

The Privy Council said the test for a conviction was if it was safe and it considered that it was not, with reputable people challenging the Crown's case.

It found the method used to test the speck of brain tissue found on Mark Lundy's polo shirt, which the Crown said was from Christine Lundy, was controversial and there was reason to doubt its accuracy.

It also said since the trial, a "welter of evidence" from reputable consultants has cast doubt on the methods the Crown had relied on to establish the time of death based on the contents of the victims' stomachs

It said the differences between the experts provided by the defence and Crown were so profound that they could only properly be resolved by trial in a suitable and searching inquiry.

"The board will therefore humbly advise Her Majesty that the appeal should be allowed, that the convictions should be quashed and that the appellant should stand trial again on the charges of murder as soon as that can be conveniently arranged," Lord Kerr of Tonaghmore said, reading the decision.

"The appellant should remain in custody pending retrial, subject of course to any decision that the High Court of New Zealand might make on an application for bail."

Outside the court, Mr Lundy's lawyers said their client was very happy, having protested his innocence from the outset.

The full Summary Judgement of the Judicial Committee of the Privy Council is:

BACKGROUND TO THE APPEAL

Mr Lundy was charged with murdering his wife, Christine, and seven-year-old daughter, Amber, in 2000. He was tried before a judge and jury at Palmerston North High Court in 2002. He was convicted of both murders and sentenced to life imprisonment with a minimum term of 17 years. The Court of Appeal dismissed his appeal against conviction and allowed the Crown's appeal against sentence, increasing the minimum term to 20 years.

Mrs Lundy and Amber had been found hacked to death in their home on the morning of 30th August 2000. Mrs Lundy was lying on her back, on her usual side of the marital bed. Amber's body was found in the doorway of her parents' bedroom. She was wearing a night dress, and lying face down at an angle suggesting she had been leaving the room when she was killed.

Mr and Mrs Lundy had a home business selling kitchenware. Mr Lundy sometimes had to be away on sales trips. On Tuesday 29th August 2000, during such a trip to Wellington, he stayed in the Foreshore Motor Lodge in Petone, about 145 km south of Palmerston North.

Telephone records produced at the trial established that while he was in Petone he had received a call from Mrs Lundy's telephone at 5.30 p.m.. After that call Mrs Lundy and Amber went to a local restaurant and bought a takeaway meal at 5.43 p.m.. At 6.56 p.m. Mrs Lundy received a call from a friend, whom she told that Mr Lundy was out. At 8.28 p.m. Mr Lundy made a call on his mobile telephone from the Petone area.

The Crown case at the trial, based on a post mortem examination of the bodies of the deceased, was that he had murdered his wife and child some time around 7 p.m. that evening. Since he had been in the Petone area at 5.30 p.m. and was there again at 8.28 p.m., for the Crown's case to be right, Mr Lundy would have had to complete the round trip from Petone to Palmerston North and back and to have carried out the murders in the space of two hours and fifty-eight minutes. (The mobile telephone evidence was to the effect that the location of the telephone receiving the call was established at the start of the call, not when it ended.)

Since there were no eye-witnesses, the trial depended largely on the evidence of scientific experts. There were three main strands to the Crown's case that were crucial to the trial. Each of these was challenged by new evidence which, according to submissions made on Mr Lundy's behalf to the Board, showed that there had been a miscarriage of justice.

First, the Crown had relied on evidence of the contents of Mrs Lundy and Amber's stomachs to show that they must have died at around 7 p.m. Secondly, their experts identified biological tissue on Mr Lundy's shirt as being central nervous system (C.N.S.) tissue from Mrs Lundy, and Mr Lundy's lawyer had conceded that this was the case. Thirdly, although the Lundys' computer showed it had been switched off at 10.52 p.m. that night, their experts claimed that the disordered state of some of its registry files suggested that the settings had been tampered with in order to disguise when it had in fact been shut down.

The Board unanimously advises Her Majesty (i) that Mr Lundy's appeal should be allowed; (ii) that the convictions should be quashed; (iii) that the Mr Lundy should stand trial again on the charges of murder as soon as possible; and (iv) until then, and subject to any decision of the High Court of New Zealand on the question of bail, Mr Lundy should remain in custody.

REASONS FOR THE ADVICE

The Board had to decide two principal issues:

Was Mr Lundy entitled to introduce the new evidence?

If so, what was its significance in the appeal?

The Board did not have to decide (nor did it purport to do so) whether the new evidence that Mr Lundy wanted to introduce was better or more accurate than the prosecution's evidence [127].

The Board holds, first of all, that new evidence can be admitted only if it is credible. It would also usually have to be 'fresh' evidence: evidence that the defendant or his lawyers could not have obtained for the trial if they had been reasonably diligent. If both those conditions are met, the evidence will be admitted unless it would not affect the safety of the conviction. But if it were credible evidence that was not 'fresh' it could still be admitted if there was a risk of a miscarriage of justice[120]. Where a case against an accused rests exclusively or principally on scientific evidence, when on an appeal, application is made to have admitted new scientific material which presents a significant challenge to that evidence, the court should not be astute to exclude the new material solely because it might have been obtained before the trial [121-122].

The new evidence in this case clearly is credible: the experts who provided it are distinguished in their fields, and it is certainly capable of being believed [127]. Although the evidence is not 'fresh' in the technical sense defined above, the Board admits it because it 'presents a direct and plausible challenge to a central element of the prosecution case' [128] and there is therefore a risk of a miscarriage of justice.

The significance for the case

The Board then has to decide whether Mr Lundy's conviction was safe, given the evidence emerging after trial. The test in New Zealand, as in the United Kingdom, as to whether a conviction was safe in these circumstances is whether the new evidence might reasonably have led to an acquittal [150]. On that basis, the Board holds that, in light of the new evidence, Mr Lundy's conviction could not be considered safe [151].

Since the trial, a 'welter of evidence' from reputable consultants has cast doubt on the methods the Crown had relied on to establish the time of death based on the contents of the victims' stomachs [129].

Furthermore, the use of the particular method used to identify the tissue as C.N.S. is controversial both in criminal trials generally, because it is relatively untested in that context, and in the particular circumstances of this case, where there is, at least, reason to doubt the accuracy of the testing, given the state of the samples [92]. One of the experts whom the Crown had consulted had expressed the view that the use of this type of testing in criminal trials was novel [134]. Another had said that it was impossible to identify the tissue as CNS tissue [130 and 131]. The Crown had failed to disclose to the appellant's legal advisers in advance of trial, the reports in which these opinions had been expressed.

Mr Lundy provided evidence from two experts to the effect that a virus called KAK, found on the computer, could have caused the disarray in the registry files which the prosecution expert had said showed the computer had been tampered with. One of the appellant's computer experts advised that, in any case, the only way to achieve the same effect manually and without leaving further traces would be so sophisticated that even many computer experts were unaware of it [141]. The possibility that Mrs Lundy was still alive and using the computer at 10.52 p.m. was completely at odds with the Crown's case [142].

Having concluded that the convictions should be quashed, the Board considers that the best course is to remit the case to the High Court rather than to the Court of Appeal because 'the divisions between the experts are so profound, they range over so many areas and they relate to matters which are so central to the guilt or innocence of the appellant, that … they may only properly be resolved by the triers of fact in a trial where a suitable and searching inquiry into all these areas of dispute may take place.' [164]

This summary is provided to assist in understanding the Committee's decision. It does not form part of the reasons for that decision. The full opinion of the Committee is the only authoritative document. Opinions are public documents and are available at www.jcpc.gov.uk/decided-cases/index.html.