The Property Council says campaigning to save an earthquake-prone building in central Wellington needs to be open to letting some heritage buildings go.

The Environment Court has ruled the Harcourts Building on Lambton Quay, which is just 17% of building code, cannot be demolished. 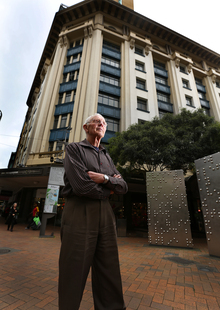 The owner appealed when the Wellington City Council refused his resource consent to pull it down.

Property Council Wellington branch vice-president Ian Cassels says the parties disputing the demolition proposal need to come together and find a solution, rather than leaving the building as it is.

He says there needs to be a decision as to what heritage buildings can be kept.

"It's a very large issue. How much of it can we feasibly deal with and what parts are we prepared to trade away?"

Building and Construction Minister Maurice Williamson says there are many buildings, some heritage, that simply aren't commercially viable to strengthen.

He says the court's decision is wrong and the Government will likely now introduce new legislation to ensure more heritage buildings don't go down the same route as the Harcourts Building.

May be demolition by neglect - owner

The building's owner Mark Dunajtschik says the category A listed heritage building is not commercially viable and he wants to replace it with a new building.

He says he's spent $500,000 in legal costs trying to bring the building down and won't be spending any more money on what he calls a lost cause.

He says strengthening the structure of the building is feasible but reinforcing the masonry isn't a commercially viable option for him.

"It will be demolition by dereliction. It will crumble sooner or later. It won't be in my lifetime but it will crumble and it will be just (a) very derelict building on Lambton Quay."

Mr Dunajtschik says he will cordon off the building for safety reasons.

In the judgement obtained by Radio New Zealand, the Environment Court agrees the building does have significant seismicity issues and can't be rented out but says that does not justify its demolition.

The court ruling says the building's architectural character and design means it has a high heritage value that contributes strongly to the Lambton Quay streetscape.

A Wellington City councillor says she's delighted with that decision.

Iona Pannett says the ruling is great news for heritage in Wellington.

"It's an absolute win for heritage post Canterbury. Of course people are increasingly concerned about public safety in earthquake prone buildings but basically the court has found that the heritage values are very important and the building needs to be preserved.

"But they of course acknowledge the building also needs to be strengthened."