The Tertiary Education Union and the Union of Students' Associations are opposing plans to cut the size of the councils governing universities and wananga. 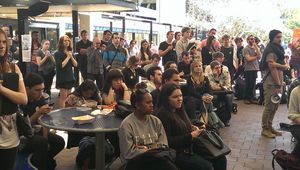 Tertiary Education Minister Steven Joyce proposes reducing the councils from up to 20 members to between eight and 12, saying they need to be smaller so they can make decisions faster.

The institutions themselves should decide if students and staff should be represented, Mr Joyce says.

But student leaders say that is not good enough, and their place at the table - and that of staff - should be guaranteed.

Several hundred students gathered at a rally at Auckland University on Wednesday to protest the move, with speakers saying it will result in fewer staff and students on university councils. The students were also protesting fee increases.

About 30 of the protesters then occupied the offices of Campus Life for several hours before deciding to leave when security guards gained entry.

"The guards broke through the doors and blocked anyone from accessing bathrooms and things like that," student Mikaela Hunt says.

The protesters will regroup and organise a response to the university's fee-setting meeting, which Ms Hunt says is scheduled for the end of the month.

Union of Students' Associations executive director Alistair Shaw says the proposals are outrageous and a fixation on a business model.

"Every decent university in the world has staff and students sitting around the table deciding what the focus of that university should be - where it should be investing its money, what its research priorities are, what its strategic direction is," Mr Shaw says.

The cuts will mean universities will not have engagement with the people they are supposed to serve, he says.

Tertiary Education Union secretary Sharn Riggs says universities and wananga will lose sight of their social role if the Government slashes the size of their governing councils, and that the proposal has a business focus which ignores the wider role of tertiary institutions.

"Basically, it's setting up a model of ensuring that all of our tertiary education institutions now are simply businesses, that they have no other connection other than being run as a business and delivering as a business," Ms Riggs says.

However, Canterbury University is already seeking a smaller council, saying it wants to improve its decision-making by going from 20 members to 12.

Labour leader David Cunliffe says bad logic is being used in the plan.

"Frankly I just don't accept the logic which I understand Mr Joyce has used, which is he wants to see universities climbing up the international rankings so he's shrinking their councils. It simply doesn't follow," Mr Cunliffe says.

University councils will lose direct access to student and staff views in their decision making, he says. Labour can see no justification for the changes and will look seriously at reversing them, if it becomes government.