The Fire Service has now put out a fire in the Lower Hutt suburb of Petone during which a firefighter was seriously burnt.

More than a dozen fire engines and 60 firefighters were at the scene of the fire. 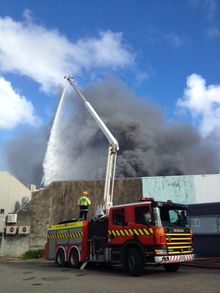 Fire at the Racetech factory in Petone, Wellington. Photo: RNZ

It is believed the fire started at the rear of a building housing the auto upholstery company Racetech, on the Hutt Road.

Mr Key says it's too early to say how the fire started.

Police are advising motorists to avoid the area and traffic is currently being diverted.

Thick plumes can be seen across Wellington Harbour.

The factory is believed to contain large amounts of foam padding and firefighters are pouring water on the roof of the building as flames and smoke continue to billow.