Police in Hamilton are looking for two men they believe are responsible for three aggravated robberies over the past two days. 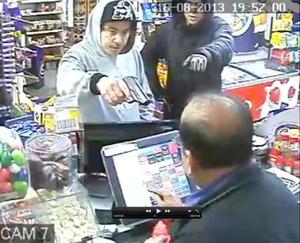 The robberies took place on Thursday evening at a Super Liquor store in Chartwell and on Friday night at Tuhikaramea Superette and the TAB on King Street.

In the most recent robbery, at the TAB, the two men smashed through the front window and threatened staff with the pistol.

In each of the cases they made off with money and other items.

Police say they are concerned about the escalation of the attacks and are warning people not to approach the men.

Acting Detective Sergeant Andrew Mortimore says if the attacks continue it is only a matter of time before someone gets hurt.

Mr Mortimore says the men made no attempt to disguise themselves during the robberies so he is hopeful someone will be able to identify them.