Demolition work is underway on an earthquake damaged lift shaft in Wellington in the wake of the severe earthquake that shook the centre of the country on Friday.

The 6.6 magnitude quake at 2.31pm on Friday has been followed by dozens of aftershocks.

It has caused widespread damage in Seddon and Marlborough and sparked traffic chaos in Wellington as workers tried to leave the central city en masse. 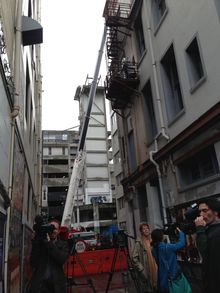 A nine storey lift tower in Lukes Lane in Wellington, which had already been damaged in the earthquake on 21 July, suffered further damage on Friday and residents in neighbouring properties were evacuated on Friday afternoon.

Radio New Zealand's reporter at the scene says a large crane arrived at the site on Saturday morning and the demolition has begun.

Mr Scott says bringing it down will not be easy as the top of the structure alone weighs at least 40 tonnes.

"We've got the steel super-structure at the very top, I've authorised that to start coming down today," he says. "We're working at pace but also being very cautious about how we're doing it."

The council says it doesn't know how long it will take to complete the demolition, and experienced consultants will be flown in from Christchurch in the next two days to help.

Building inspections are continuing elsewhere in the city but council spokesperson Richard MacLean says the checks have identified no substantial damage.

Structural engineers will continue to work through the weekend to prepare for business on Monday. 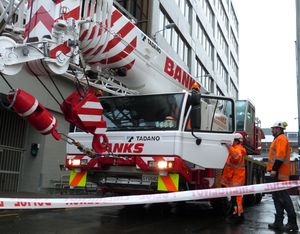 A crane has been brought in to help demolish the lift shaft. Photo: RNZ

Mr MacLean says there have been anecdotal reports of internal damage to some buildings around the central city, similar to that suffered in the July quake.

He says the council has been told of further damage to the former Public Trust Building, which has category one heritage status, and several other buildings have superficial damage, although none pose a danger to the public.

Any building owner with concerns should contact council building inspectors.

Mr MacLean says the city has coped very well with the large shake.

All council facilities, including libraries and sportsfields, are open on Saturday.

Police in Wellington say extra patrols will be on duty on Saturday because of the string of quakes that has rattled the capital.

Wellington's District Commander Superintendent Sue Schwalger says more staff will provide a greater visible police presence so people can feel safe and be confident the police can respond to any emergency.

Transport services are returning to normal after the earthquake forced the closure of all Wellington commuter lines while they were checked for damage.

Tranz Metro says train services in the city are expected to run as normal on Saturday.

Following an inspection overnight, the company says the tracks are currently fit for operation but may need to be closed again if there are further earthquakes.

Wellington Airport was closed briefly on Friday afternoon so the runway could be inspected but it was quickly declared safe.

Bus services in the capital are also running as normal.