The Vulnerable Children Bill will be introduced to Parliament soon, making the public sector more accountable for protecting children, as well as placing greater restrictions on known and suspected abusers. 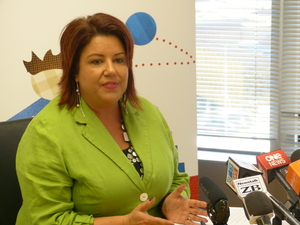 Paula Bennett said on Tuesday that New Zealanders are sick of known abusers going on to hurt more children.

The new legislation will allow courts to impose Child Harm Prevention Orders, restricting the movement of convicted child offenders and other adults assessed as posing a serious risk to children.

Workers on the Government's payroll who have contact with children, including teachers, will all have to go through identity and police checks to screen out potential abusers. About 370,000 people will be affected.

The Government has stopped short of bringing in mandatory reporting of child abuse, but new policies to be introduced in government agencies are intended to make it clear to staff what to do if they see signs of neglect or abuse.

Parents who have seriously abused or killed a child in the past will have to prove they are safe to parent again if they have another baby, reversing the onus of proof that currently lies with welfare agency Child, Youth and Family.

The Family Court will be given the power to restrict guardianship rights of birth parents whose children have been removed from their care if they go on to unfairly disrupt their children's lives.

The minister said there may be some human rights concerns about imposing orders on people without convictions or offenders who have served their time, but the Government is putting the rights of children first.

Mrs Bennett says under the law, the heads of five government departments - Health, Education, Police, Justice and Social Development - will be more accountable for the protection of children.

Prime Minister John Key said on Tuesday the courts must have good reasons to put a prevention order in place. He said the Government does all it can to preserve people's freedoms, but also has a responsibility to stand up for children and as a country, New Zealand's record on child abuse isn't good.

The Maori Party has not committed to supporting the welfare reforms, saying it is the role of families - not the Government - to take responsibility for child abuse.

The Labour Party said it wants to see evidence that the Vulnerable Children Bill will achieve what the Government intends.

Health spokesperson Annette King told Radio New Zealand's Checkpoint programme while the bill may have some fish hooks, she supports aspects of it.

"I believe that parents that have abused and neglected children that go on to have other children ought to show they are fit and proper parents. We cannot have children going back into a situation where there has been a record of abuse and neglect - I think it's a sensible move."

However, Ms King said there is a risk the bill could impinge upon human rights - a fear also held by a justice reform group.

Kim Workman, a spokesperson for Rethinking Crime and Punishment, said a response that excludes and punishes the offender is not always the most effective, and he would like to see more thinking about what the best approach would be.