Police are seeking assistance from the public in finding two armed men who held up a liquor store in Auckland on Thursday night and threatened to shoot one of its employees.

The robbery was at the Takanini Liquor Bargain shop in Princess Street.

Police said one of the two robbers had a firearm and threatened to shoot.

Two employees were seriously assaulted: one has a broken jaw and the other was knocked unconscious and left with eye injuries.

The offenders left in a black four door Mazda Familia. They are still at large.

Police would like to hear from anyone who recognises the men in the photos or has any information that may lead to revealing their identity. 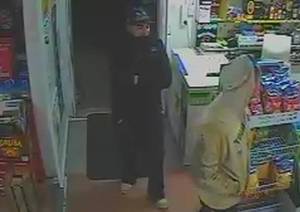 The other suspect follows him in. Photo: NZ Police 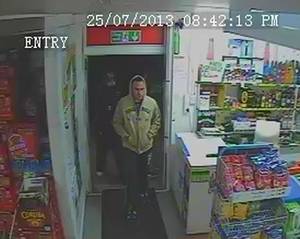 One of the suspects enters the Takanini Liquor Bargain shop on Thursday night. Photo: NZ Police