Defence Minister Jonathan Coleman says he accepts assurances from the Defence Force that no illegal surveillance was carried out on a New Zealand reporter working in Afghanistan. 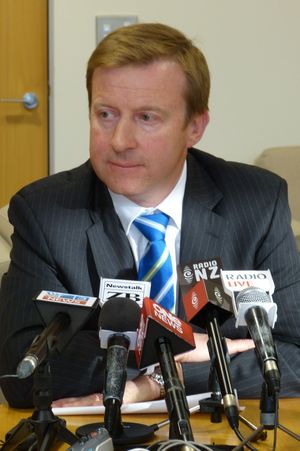 Dr Coleman told reporters on Monday that he had discussions with the Defence Force at the weekend and said it conducted an extensive search of its records and found no evidence of any such surveillance.

The minister said there is no record of the United States being involved in any kind of monitoring of Mr Stephenson and he had "complete assurance" in advice received from the Defence Force.

In a statement on Monday, the Acting Chief of the Defence Force said he had questioned officers responsible for operations in Afghanistan who told him that no such surveillance took place. Major General Tim Keating said that included asking a foreign organisation to do it on New Zealand's behalf and the Defence Force identified no information that supported Nicky Hager's claims.

However, Mr Hager isn't convinced, given what the Defence manual says about journalists.

"There's a long-term record from the Defence Force of seeing people who probe them, rather than just quietly and happily printing their press releases, as a hassle and a threat to their operations and people who should be thwarted and hindered."

Mr Hager said no one should be surprised that the Defence Force would monitor Jon Stephenson's communications.

He told Radio New Zealand's Morning Report programme the manual is evidence that the Defence Force regards investigative journalists as a threat and enemy. He said New Zealand soldiers are often sources and the document illustrates how the military views all leaks as a threat.

Internet blogger Russell Brown says he isn't reassured by the Defence Force maintaining it didn't spy on Jon Stephenson. He told Radio New Zealand's Checkpoint programme he has no reason to believe that his emails with the journalist have been tracked, but says that doesn't mean Mr Hager's information is inaccurate.

"Nicky Hager generally isn't wrong about this kind of thing. He has very good sources within the military. We saw that with Other People's Wars - the book he wrote which really, although it was described as a pack of lies at the time, I don't think anyone seriously challenged its content."

Military manual to be reviewed

The Defence Minister said on Monday he has also asked the Defence Force to review a section of the manual that refers to investigative journalists as a subversive threat, saying that is inappropriate and heavy-handed.

Journalists are included in the manual in a group of non-traditional threats along with pressure groups, criminal elements, dishonest staff and computer hackers. The document calls investigative journalists subversives who pose a similar threat to security as criminals and hackers.

Jonathan Coleman said he became aware of the reference to journalists at the weekend. He said the Defence Order was issued in 2003, then reissued in 2005 by Sir Bruce Ferguson, who was head of the Defence Force.

Sir Bruce, who criticised the manual on Radio New Zealand's Morning Report on Monday, later said he didn't realise it was issued while he was Defence chief and would never have signed off that section of the manual had he noticed it.

"Had I seen that part about the subversive journalists, I would've taken exception to that."

Sir Bruce said it was a busy time for the Defence Force and has no idea what else he may have missed during his four-year tenure. He said there have been two other Defence chiefs since then and is concerned that the reference has not been removed in that time.

He said he has never met a journalist who has given him cause for fear or concern and supported Dr Coleman's call for the manual to be reviewed and the reference removed.

Media commentator and former New Zealand Herald editor Gavin Ellis said the Defence Force is besmirching the reputation of journalists. He said there is a huge difference between embarrassing the military and being an actual threat to national security.

The Engineering, Printing and Manufacturing Union, which represents many journalists, believes the manual is designed to create fear in the military so that people won't expose issues.

Strategic analyst Paul Buchanan said if the Defence Force is worried about leaks, it should monitor troops - not reporters.