Whangarei celebrated the opening of a new bridge on Saturday morning. 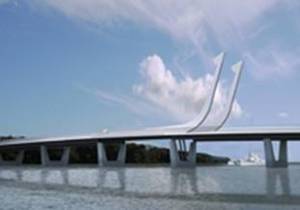 The $30 million bridge was funded with a 50% Government subsidy and is the first in the country to feature a bascule: a portion that raises to let yachts to pass beneath.

A flotilla of boats sailed under the new bridge and a parade of vintage cars, trucks, bicycles and a brass band then moved across, cheered by crowds waiting their turn to walk across for the first time.

The bridge is expected to reduce congestion in central Whangarei. It was designed by Martin Knight, the creator of the Gateshead Millennium Bridge in England.

It is the first in New Zealand to feature a bascule: a section that lifts to let boats go under it.

It was built by a joint venture partnership between Transfield Services and McConnell Dowell.