The Ministry of Business Innovation and Employment is asking a judge to issue a formal ruling that the Defence Force is highly culpable over the failure to ensure the safety of a soldier who died in a training exercise. 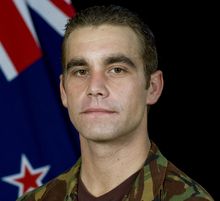 Private Michael Ross drowned when he fell from an inflatable boat into Lake Moawhango, a small lake located with the Army's Waiouru Military Camp, in September 2012.

The 29-year-old was loaded down with gear but had on an inadequate lifejacket. Navy divers found his body a week later following an extensive search.

A sentencing hearing began at the Auckland District Court on Thursday after the Defence Force pleaded guilty to failing to take all practicable steps to make sure that Private Ross was safe.

Reading out a victim impact statement to the court, Private Ross' cousin said it was heartbreaking to know that the death was avoidable.

The Ministry of Business Innovation and Employment laid the charge. Lawyer Saar Cohen-Ronen told the court the Defence Force had agreed to pay $241,000 in reparation to Private Ross' family. It included $141,000 in life insurance, $15,000 in funeral expenses and $85,000 in extra reparation.

Mr Cohen-Ronen said the Defence Force should be commended for its approach, but asked Judge Stephen O'Driscoll to issue a formal ruling that it is highly culpable over multiple systemic failures which resulted in Private Ross' death.

The chief of the Army told the court that he is embarrassed by findings into the death. Defence Force lawyer Craig Ruane read out a statement on behalf of Major General Dave Gawn:

"Reading the report, I was embarrassed with the findings and the lack of professionalism that was evident in parts of the activities that Michael participated in. I felt shame and sorrow for the needless loss of Michael.

"We (the Defence Force) failed in our duty of care to our soldiers. We have failed every parent who has entrusted their son or daughter to us. Most of all, we've failed Michael."

The sentencing has been adjourned until next week and Judge O'Driscoll is expected to make a written ruling at the end of the week.

Immediately after the sentencing, the military will release a Court of Inquiry's report into death. Defence Minister Jonathan Coleman has said Private Ross' death was preventable and that he wanted an assurance that the Defence Force does not have systemic health and safety problems.

Outside court, the family of Private Ross said a monetary reparation was never the intention, but it would help.

Family spokesperson Charles Hohaia told Radio New Zealand's Checkpoint programme one of the purposes of the inquiry was to establish the truth behind what happened.

He said money was never the issue, but it would go towards supporting Private Ross' partner and other close family members.

Mr Hohaia said having the Chief of Army in a statement read to the court accept there were shortcomings and systematic failures was a positive step forward.