An earth dam on a property south west of Seddon is being assessed by engineers after reports it had cracked during the swarm of earthquakes in the region. 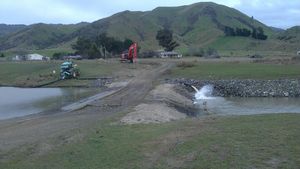 The dam being emptied after the July quake. Photo: RNZ

The private dam at Haldon's Vineyard is 20 metres high and holds holds 250,000 cubic metres of water.

The dam is built across Starborough Creek which flows through the town of Seddon about 15 kilometres away. Owner Richard Bell is slowly emptying the dam, after raising concerns over its construction.

The structure has been assessed as safe by one engineer, however the Marlborough District Council is calling in an independent dam expert for a second inspection.

The council says it believes the dam does not pose a threat to people living downstream.

Richard Bell told Radio New Zealand's Morning Report programme on Wednesday that cracks in the dam were continuing to contract and expand, and water was still being pumped out.