Residents in Seddon are counting the cost of damage caused by Sunday's 6.5-magnitude earthquake which struck in the sea to the east of the small Marlborough town.

Although the damage has been relatively minor, homes and businesses in the area have been affected. Power has been fully restored, but some homes in Seddon, just 20km from quake's epicentre, are without window panes and are littered with broken crockery and glassware.

Stock was damaged at the local tavern, store and cafe. However, because most of the damage is to private property, Marlborough mayor Alistair Sowman said it is hard to put a cost on it at this stage.

Power has been restored in the region. Marlborough Lines managing director Ken Forrest said about 2020 customers lost power due to the quake but the damage to the company's infrastructure was minor compared to that from windstorm a fortnight ago.

The Ministry of Education is assessing damage to schools in Marlborough.

Supermarkets in Blenheim managed to reopen on Sunday after cleaning up food that had fallen from shelves. Both were busy with people stocking up on bottled water, tinned food and torches. People are being advised to boil their drinking water.

Yealands Estate Winery is situated on the hill above Seddon, just 500 metres from the Awatere fault line. The quake smashed bottles and glasses in its cellar door sales area and owner Peter Yealands estimates he has lost more than $100,000 in leaked wine.

Meanwhile, the owner of the six-storey Porse House in Blenheim says an engineer has not found any structural damage, though he is still waiting on an official report.

Porse House was designed by the same person who designed the CTV building in Christchurch, which was destroyed in the 2011 quake. Its tenants vacated the building on Monday morning after more quakes continued to shake it.

The chief executive of TH Barnes, John Smithies, which owns Porse House, says he understands his tenants have concerns about the building, but he is hoping planned strengthening work will be fast-tracked and completed within the next few weeks. 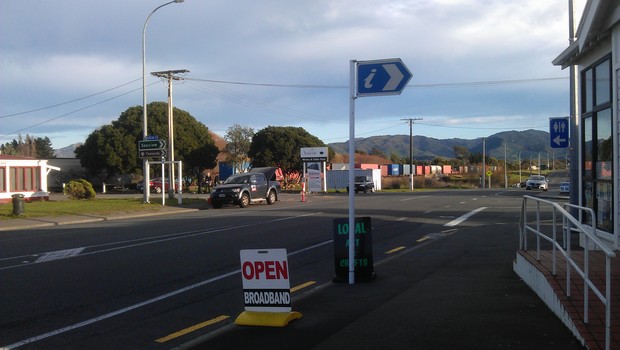 Seddon's main street with a train stopped in its tracks. Photo: RNZ