A centre-right candidate for the Auckland mayoralty wants to significantly cut the level of rate rises and develop a new city centre around Manukau. 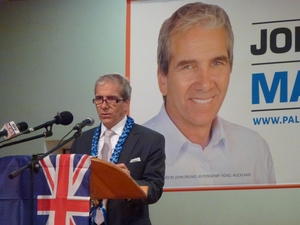 Launching his campaign on Saturday, restauranteur John Palino said rate rises should be linked to the general cost of living - a policy that, if implemented now, would put up rates by only a quarter of the agreed 2.9%.

"There's no reason why we shouldn't be able to," he said. "I'm going to go through line by line of our accounts, I'm going to look at all the inefficiencies and I'm going to cut them out."

Mr Palino is also promoting the idea of developing a second metropolitan area around Manukau in south Auckland. He says focussing growth there would remove the need to intensify housing across the rest of the city, although he couldn't put a price tag on the policy.

He is also opposed to building the version of the downtown rail tunnel recently backed by the Government, saying it needs to be extended to the Wynyard Quarter and the university; and he wants a sinking lid on the number of council staff employed.