The Government has turned down a proposal to build an 11.3km bus tunnel that would have connected Queenstown with Milford Sound through two national parks in the South Island.

The $180 million tunnel under parts of the Mount Aspiring and Fiordland National parks would have halved the travel time for the 420,000 people who visit Milford Sound on the west coast of the island each year. 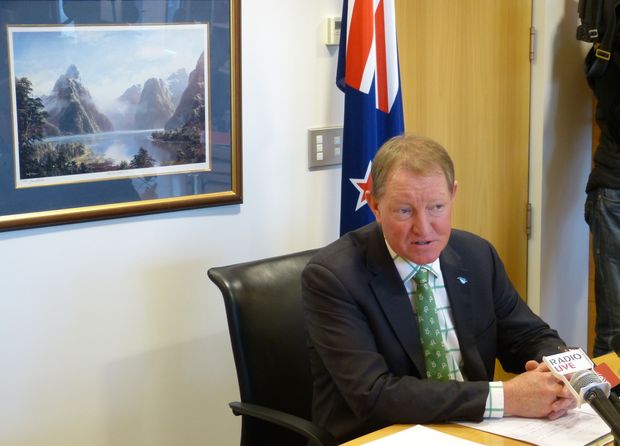 Nick Smith says he gave the plan much thought and visited sites that would be affected. Photo: RNZ

The company behind the plan, Milford Dart Limited, said the tunnel would stimulate the economy by cutting four hours off the return trip from Queenstown to Milford Sound. It included 150 metres of road entry ways in the parks at either end of the bus-only tunnel.

But opponents feared it would destroy parts of the Fiordland National Park and bypass other sightseeing opportunities.

Conservation Minister Nick Smith said on Wednesday afternoon that he declined the proposal because the environmental impacts are significant and beyond what is appropriate in two of New Zealand's most spectacular national parks and a designated World Heritage Area.

"National parks are special places - and there are few as spectacular as the Mount Aspiring and Fiordland national parks. In my time as an MP and as a minister, this will be one of the more significant and difficult decisions I have made."

Dr Smith said thought a lot about it and visited sites that would have been affected, but there were three main reasons for rejecting the proposal:

Nick Smith also doubted that the project could have been completed for the estimated $180 million price tag and that shortcuts may have been taken to get the project in on budget. Dr Smith said that also could have left the Government with the risk of having a half-completed tunnel with a clean-up liability for the taxpayer.

"My worry is that either you would end up cutting corners on the safety or alternatively going broke. And with either of those options, the Crown or the Government ends up picking up the pieces - and that was not satisfactory."

Dr Smith said he was concerned at the price tag as he looked around the world at the cost of making tunnels of this length safe.

The minister said Milford Dart Ltd outlined an alternative tunnel late last week that would be 2km longer and would relocate the eastern portal about 3km south-east. Dr Smith said it is a significantly different proposal and he has had insufficient information to make a decision on it.

There were scenes of jubilation in Glenorchy on Wednesday afternoon as members of the Stop the Tunnel action group gathered to hear the decision. The group of about 20 people has spent the past 18 months driving a campaign to stop the Milford tunnel going ahead.

Stop the Tunnel member Ruth-Ann Anderson believed the decision is the right one, but the group would be nervously waiting to see if Milford Dart Ltd lodges an appeal.

"This whole process has shown that there are problems within the Conservation Department and we hope this is going to be a real chance to refocus what the department is supposed to be doing and hopefully get them back on track. So again, Dr Smith - good luck."

The group said it would continue to look after the interests of the Fiordland and Mount Aspiring national parks. 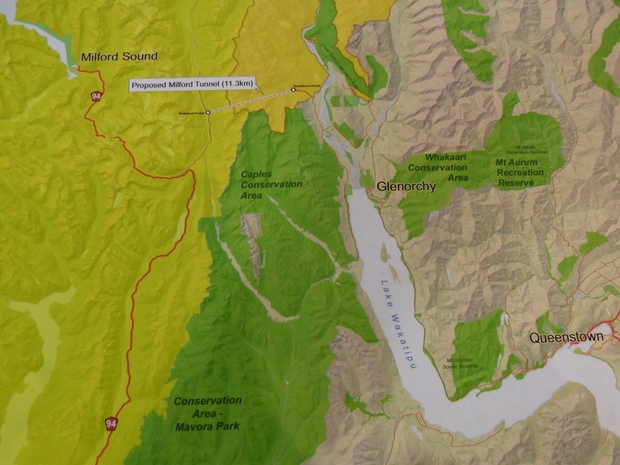 The proposed route of the tunnel. Photo: RNZ

The Department of Conservation has admitted it did not carry out all the necessary paperwork to safeguard the status of the Te Wahipounamu World Heritage Area in Fiordland.

The department is completing an environment impact report for UNESCO over the proposed Milford tunnel and a monorail through the Snowdon Conservation Area.

UNESCO Asia Pacific chief Feng Jing said the organisation intends to investigate the effects of the developments and may put the World Heritage area on a danger list until the impacts are known.

"We are concerned there should be proper process. We are fully aware of this and we brought that to the attention of your delegation here to UNESCO, also DoC."

The UN cultural and scientific body has not ruled out removing World Heritage status altogether.

A spokesperson for DoC said the department did not realise it needed to inform UNESCO of the impacts of the developments.