Aucklanders are being warned they will have to pay to use some roads within the next eight years, or face higher rates and more congestion.

A think-tank commissioned by mayor Len Brown on Monday presented the Auckland Council with two packages of fundraising ideas needed to plug a $12 billion transport gap for a 30-year period. Both include higher taxes and other charges. 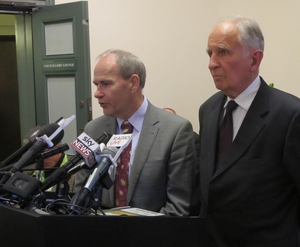 The Consensus Building Group has been considering public views on its earlier report on how to find an extra $400 million a year for future transport projects in the city, including new arterial roads and the downtown rail tunnel.

One funding option relies on higher rates and fuel taxes, as well as tolls on new roads. The other includes higher public-transport fares and charges to use existing roads.

Mayor Len Brown told Radio New Zealand's Checkpoint programme that, under the first option, petrol tax would have to rise every year between 2015 and 2021.

"The Consensus Building Group felt that 3.5 percent over and above in terms of excise tax would be required after 2015 to 2021 to meet the bill as indicated in the Auckland plan."

Mr Brown told reporters the council and Aucklanders would debate the options in detail and a referendum is a possibility.

"It will not be an issue that will just be finally determined around the table. This is one of the most intensely important issues for Aucklanders to grapple with and decide on and I want as many Aucklanders in this debate as possible."

Mr Brown said the debate is likely to happen in the next 12 months.

The Consensus Building Group said the Government must contribute more and public transport needs to be improved before new charges for vehicle use begin.