Air New Zealand will be flying bigger planes into Whangarei from next month, which conversely will mean it can get around new runway restrictions.

The airline has had to reduce passenger numbers on its 19-seater Beech aircraft in bad weather, in order to meet new Civil Aviation Authority landing rules. 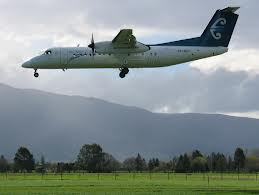 That's meant a number of passengers have had seats cancelled at the last minute, and have had to be bussed from Auckland to Whangarei .

Air New Zealand says from 12 August it will use Bombardier Q300 planes on four of the six daily return trips to Whangarei.

It says the bigger plane can land at Onerahi airport within the rules, with a full load of 50 passengers.

The airline says that will give customers more certainty and provide an extra 48 seats a day on flights to and from the north.