The man fatally shot on an Auckland motorway after a police chase was a former soldier discharged from the Army for disciplinary reasons. 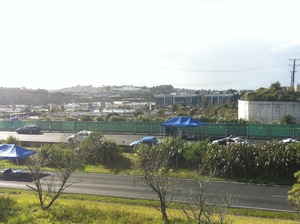 The section of motorway where the chase ended. Photo: RNZ

Caleb Henry, 20, died in hospital after being shot on the northern motorway in the early hours of Monday morning after police pursued him from Bay of Plenty.

He was earlier linked to a home invasion near Opotiki, where a farming couple were threatened with a knife, cut, tied up and robbed.

Mr Henry's Facebook page is dominated with photos of him in military clothes, holding weapons and containing posts making derogatory comments about police.

The Defence Force say he was a member of the Army from March 2010 to July last year, when he was discharged for disciplinary reasons. He was not deployed during that time.

Police say Mr Henry fired shots at them at three different points during the overnight pursuit, which began around the Kaimai Ranges. On the motorway they fired back.

They say it is still too early to confirm whether it was one of their officers who fired the fatal shot.

Armed offenders squads from Rotorua and Waikato were called in some time after the violent home invasion in Waiotahi at about 7.30 on Sunday night, in which the couple were injured and a ute and a high-powered firearm stolen.

Officers pursued the car towards Rotorua, temporarily losing touch with it before finding it again shortly after.

Inspector Kerry Watson says shots from a high-powered rifle were fired from the vehicle at a number of locations in Waikato, on the southern motorway and near the Victoria Park tunnels in Auckland city.

The car was finally stopped at about 2.30am after several tyre deflation devices were activated on the motorway north of Auckland. 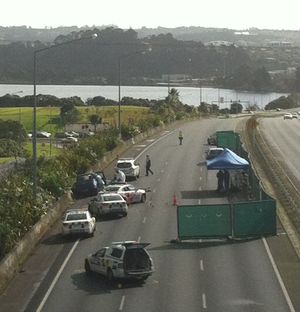 The pursuit ended on this stretch of motorway. Photo: RNZ

An Assistant Police Commissioner, Allan Boreham, says Mr Henry could have fired at other vehicles and police want to hear from anyone who has found unexplained holes, projectiles or spent cartridges on their property or near their vehicles.

Mr Boreham says armed offenders squad officers exchanged shots with Mr Henry at the end of the pursuit but it's not clear whether he was killed by an officer's bullet.

He says Mr Henry was still alive when officers got to him, and they spent about 25 minutes trying to resuscitate him at the scene. He was taken to Auckland Hospital in a critical condition but could not be revived.

Mr Boreham says a forensic investigation and a post-mortem will seek to establish how he died.

He also says investigators will have to establish how he was somehow able to fire shots at police while driving at high speeds.

The 66-year-old man and the 63-year-old woman attacked in the home invasion suffered deep cuts to their hands and have had surgery.

Mr Boreham says they managed to escape a number of hours after the attack and go to their neighbours.

They remain in Whakatane Hospital.

Opotiki mayor John Forbes says they are stalwarts of the community who are well-known for their generosity.