The father of New Zealand triplets killed in a Qatar fire last year says a trial has left many unanswered questions about the tragedy.

The fire at the Villaggio mall in Doha on 28 May 2012 killed 19 people, including two-year-old Lillie, Jackson and Willsher Weekes. 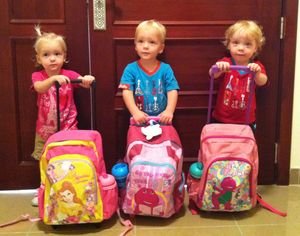 The mall's manager and three others have been convicted of involuntary manslaughter and given the maximum sentence of six years in prison, while a fifth defendant has been jailed for five years.

The triplets' father, Martin Weekes, says he and his wife Jane still don't really know how the fire happened.

"The phrase we tend to use is deafened by silence, he told CNN.

"Silence in our house, because I mean we had a really busy house with three two-year-olds.

"And similarly, we've been deafened by silence from the authorities in Qatar who just failed to communicate or show any interest."

In April this year another fire broke out at the mall. The Doha News website at the time quoted the Ministry of Interior's Twitter account as stating the blaze was caused by an electrical issue with an air conditioning unit.