Areas of North Otago have been drenched by rain, flooding farmland and washing out roads.

Two days of heavy rain shut down North Otago, cutting off towns and threatening homes. However, Civil Defence in Waitaki says the worst of the flooding in the district appears to be over on Monday night. 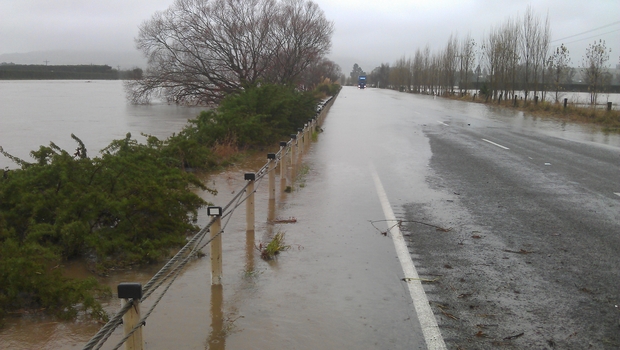 State Highway 1 near Waikouaiti has been restricted to trucks only. Photo: RNZ

The deluge was worst along the Kakanui River, with water stranding about 130 motorists at Maheno who spent the day at the local tavern which became a makeshift welfare centre.

At the river's mouth, the township of Kakanui was cut off. The bridge reopened at 5pm, but Civil Defence has advised drivers to be cautious. The river was receding on Monday night but the bridge had been knocked by floating trees, though has been inspected and is safe. There is no significant risk to houses in Kakanui, but residents are being advised to boil water.

The Otago Regional Council said up to 195 millimetres of rain has fallen on east Otago's foothills in the past few days. All rivers in Eastern and North Otago including the Kakanui, Waikouaiti, Shag and Waianakarua flooded, with most at record levels, but they have peaked.

Waitaki controller Murray Linwood said people in rural areas have been cut off, but is confident that they would have enough provisions to get by.

Mr Linwood said a farmer who went out on his motorbike to check on things got stuck and a helicopter had to be brought in to transport him back to his home. Most stock has been saved because farmers had two days of warning and were able to move animals to safety, he said.

State Highway 1 remains partially closed north of Dunedin by flooding late on Monday night. The New Zealand Transport Authority said only trucks and four-wheel-drives can get through to Oamaru.

Otago-Southland operations manager Roger Bailey said Waikouaiti River, Big Kuri Creek near Hamden, the Kakanui River at Maheno are the main problem sites. A section north of Oamaru remains closed between Kuri Junction and the Waitaki River Bridge, as well as inland on State Highway 83 though to Otematata.

Contractors were escorting drivers through the waters at Waikouaiti and Hampden, but Mr Bailey said those wanting to travel should check the Transport Agency's website for updates.

Roads in Dunedin are closed due to flooding and slips on Monday. Two slips on the Otago Peninsula are blocking Portobello Road and Harrington Point Road. Other roads blocked or impassable include Mount Cargill Road, Flagstaff-Whare Flat Road and Silverstream Valley Road.

The Dunedin City Council said contractors expected to be busy for the next couple of days.

Flooding worse 'due to quake damage'

Flooded out homeowners in Christchurch say the effects of the prolonged rainfall have been made worse by earthquake damage to stormwater drains.

The St Albans and Mairehau areas of the city suffered most. Over 110 millimetres of rain fell in Christchurch in 36 hours, leaving some areas of the city underwater on Monday. The Fire Service responded to about 80 weather-related callouts.

Julie Cairns says her Mairehau sleepout and garage were flooded and she has lost lots of paintings as a result.

"I've got paintings and things that I haven't bought back into the house since I've had the repairs done and they're stuffed too. I haven't been able to use the inside toilet since yesterday and the outside toilet we're using sparingly."

Robert Bailey is a building inspector and said the earthquake damage is to blame for the severity of these floods.

"We've had rain much worse than this and it hasn't flooded like this. It's only since the (February 2011) earthquake that we've had problems because I believe the stormwater's full of liquefaction."

Over 25 roads have been closed as rising water has made them impassable. A welfare centre Civil Defence set up at Mairehau Primary School was closed at 7pm on Monday after only about a dozen people sought help.

Meanwhile, the council is trucking fresh water to Banks Peninsula residents in Akaroa, Takamatua and Duvauchelle after stormwater contaminated the supply.