A military court of inquiry into the death of five New Zealand soldiers in Afghanistan has found they died after being attacked by insurgents.

The Defence Force released the court's findings on Thursday afternoon and in a rare move made public video footage of part of a firefight on 4 August 2012 filmed by a camera on the helmet of one of the soldiers.

It was described by the Defence Force chiefs as the biggest battle New Zealand soldiers have been involved in since Vietnam.

Lance Corporals Rory Malone and Pralli Durrer were killed during the firefight with rebels in the north-east of Bamyan Province. They were on their first deployment to Afghanistan and serving with the New Zealand Provincial Reconstruction Team.

Lance-Corporal Malone was fatally shot while trying to rescue his company commander, who had been injured in the first exchanges of gunfire. Lance-Corporal Durrer died while being evacuated.

On 19 August, Corporal Luke Tamatea, Lance Corporal Jacinda Baker and Private Richard Harris died when their Humvee hit an improvised roadside bomb in Bamyan. They were from the 2nd/1st Battalion Royal New Zealand Infantry Regiment, based at Burnham Military Camp, and were also part of the Provincial Reconstruction Team.

Chief of Defence Force Lieutenant General Rhys Jones says the footage has been made public to show the severity of the terrain and give some idea of the uncertainty, noise and confusion that can happen during an attack.

The inquiry did find however that two of the soldiers in the first incident were likely to have been wounded by friendly fire. 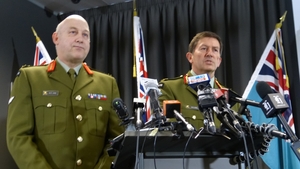 The Chief of Army Major General Dave Gawn described how a team of soldiers was sent to secure the high ground.

In the middle of the firefight, they were mistaken for insurgents by soldiers below, who opened fire with small arms and nine rounds of 25 millimetre cannon. The soldiers below were alerted immediately, but not before two New Zealand soldiers were wounded by fragmentation from the cannon fire.

Major General Gawn says the inquiry found no evidence of a second incidence of friendly fire as alleged by one of the soldiers involved in the firefight on 4 August. He says the soldier who made the allegation has recently left the army, as he has struggled to come to terms with what happened in Afghanistan.

Defence Minister Jonathan Coleman says while there are lessons to be learnt, that's not a criticism of the troops.

"When these troops are in combat it's hard to prepare people for seeing their mates gunned down in front of them, and this is a much more complex scenario than our people thought they would ever face there," he told Radio New Zealand's Checkpoint programme.

The report also recommended changes to the way bodies are handled after a live grenade and some ammunition were found on one of the soldiers once the body had arrived back in New Zealand.

Major General Gawn says the bodies suffered severe trauma in the blast, which is why the grenade was not found initially.

Lieutenant General Jones says the bodies were processed at the US Army mortuary affairs section and the grenade was missed because it was not obvious and the base didn't have x-ray facilities.

The report finds the pre-deployment training was adequate, but could be stepped up to better prepare soldiers for the complexity and chaos of a real life battle.

Major General Gawn accepts that but says it's extremely difficult to recreate that in training programmes.

"We hadn't had one of that nature before in terms of what to base it on. The combat training that our soldiers get is what enabled them to manage the situation in the manner that they did.

Major General Gawn says he's very proud of the way the soldiers responded to the attack.

The report details how Lance Corporal Mallone helped another soldier and in doing so probably saved his life. Lieutenant General Jones says recommendations for bravery awards are under consideration, but would not go into any further detail.

Jack Durrer, who is the grandfather of Lance Corporal Durrer, was flown, along with other family members, to Wellington on Wednesday to be shown footage of the battle, which was captured through a camera attached to the helmet of one of the soldiers.

Mr Durrer said, after reading the report, his grandson had done something worthwhile.

He told Checkpoint his grandson gave his life for people's freedom.