The Chief Coroner says search and rescue teams who scaled an Antarctic mountain in blizzard conditions looking for the site of a plane crash showed extreme courage. 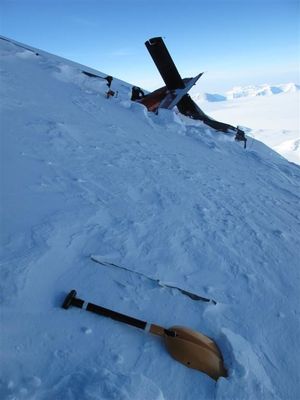 The plane crashed into Mount Elizabeth during a flight from the South Pole to Terra Nova Bay. Photo: SUPPLIED

The three men were killed when the plane hit Mount Elizabeth during a flight from the South Pole to the Italian Base at Terra Nova Bay.

A New Zealand coroner is hearing the inquest because the crash happened in an area of Antarctica that New Zealand stakes claim to.

Family members of the three watched the inquest from Canada via a live stream from the Auckland court.

The court was told the plane took off normally and had been reporting in hourly as expected up until its emergency transmitter went off.

Judge Neil McLean said in a harsh and unforgiving environment, even an experienced pilot in Antarctica like Mr Heath can crash.

He praised the search and rescue teams for their work and said the operation between the different countries in Antarctica was exemplary.

The Canadian Transport Board is investigating the crash and preliminary inquiries show there were no mechanical problems with the twin otter.

Rescuers did not reach the crash site until two days later due to bad weather. By then the nose of the plane had been buried in snow, making it too hard to recover the bodies. It is now planned to retrieve them once the snow begins to melt in October.