Wellwishers gathered at Christchurch airport on Saturday afternoon to welcome the Dalai Lama to New Zealand. 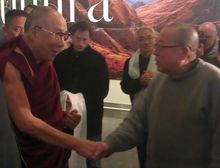 Up to 5000 people are expected to listen to a Buddhist teaching and a public talk he will give at the CBS Canterbury Arena on Sunday.

The Dalai Lama will also speak at the University of Canterbury on Monday.

He will then give talks in Dunedin and Auckland next week.

The Tibetan spiritual leader and Nobel Peace Prize winner last visited Christchurch in June 2011, when he took part in a memorial service for the victims of the February 2011 earthquake.

Jane Bodle, who was blessed by the Dalai Lama as she welcomed him to Christchurch, says the city is lucky and blessed to have him there again.