Race Relations Commissioner Dame Susan Devoy says a cartoon in the Marlborough Express that is the subject of a complaint is offensive, but does not believe it is racist.

The Mana Movement has written to Dame Susan asking her to take action against the South Island newspaper. 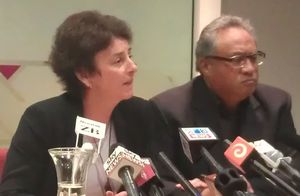 The cartoon by Al Nisbet shows a group of eight children in school uniform holding bowls as they go to get free school meals.

Two of them are drawn as obese with Polynesian features and one is saying to the other: "If we can get away with this, the more cash left for booze, smokes and pokies".

Mana's co-vice-president John Minto says the cartoon plays to the lazy racism and deep bigotry of many well-off Pakeha.

"I think there's a big difference between being able to laugh at ourselves and the foibles of New Zealanders, but this is something much more sinister and sly. It's a particularly nasty attack."

Mr Minto said he wanted Dame Susan to step in on the side of New Zealand's children and hold the paper to account.

Dame Susan says that while she finds the cartoon appalling, it does not meet the threshold for racism in the Human Rights Act and does not believe the cartoon will incite racial disharmony - which is the test she must apply.

"You have to look at what, under Section 61, will incite racial disharmony and that won't do this."

Dame Susan says the editor of the newspaper should probably apologise for any offence caused, but does not think he will.

Maori Party MP Te Ururoa Flavell says that is Dame Susan's interpretation of the law, but the party feels that the cartoon is clearly racist.

Mr Flavell says if the threshold is really that high then perhaps it is time to change it, and he is happy to meet with her to discuss it.

He believes the newspaper should apologise.

"There's still going to be a newspaper tomorrow as there will be the next day - so we can't do too much about that. But there should be some accountability with respect to those sorts of issues.

"If those newspapers are prepared to put it out in the public arena, they went through a process obviously of scanning it. It's an opinion piece.

"One of the huge things that we've got to recognise with racism is that if it's out there, you've got to name it - and that's what we're calling it."

Marlborough Express editor Steven Mason says the publication did not intend to cause offence but will not be apologising for Al Nisbet's cartoon.

Mr Mason says he knew it was pushing the boundaries a bit, but they decided to run with it anyway.

"We never set out to be offensive or upset people with our cartoon. We like them to push the boundaries, to be provocative and to stimulate, but not to offend."

Mr Nisbet defended his work, saying critics need to lighten up. He told Radio New Zealand's Checkpoint programme his cartoons are supposed to be provocative and should not be over-analysed.

"Cartoons take different angles. I mean, tomorrow I could be in favour of those people and having a go at the Government. And that's what you do as a cartoonist - you rip into everyone, all sides equally - you don't sort of hold back."

Al Nisbet says he won't be apologising for what he drew.