Antarctica New Zealand staff have placed a New Zealand flag on top of a hill near Scott Base in -42°C temperatures to mark the 60th anniversary of Sir Edmund Hillary and Tenzing Norgay's ascent of Mount Everest.

Sir Ed gained worldwide fame as the first man along with climbing companion Tenzing Norgay to scale the world's highest peak on 29 May 1953.

Antarctica New Zealand's winter base leader Becky Goodsell and winter field support Mike Rowe set off from Scott Base at 8am on Wednesday to the top of Crater Hill, returning to base about an hour and a half later. 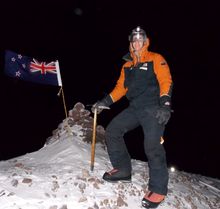 They took with them an ice axe that Sir Ed had signed and placed the flag at the summit to honour his achievement.

Mr Rowe says Sir Ed climbed Crater Hill regularly, and the pair felt close to New Zealand's favourite hero as they looked down over the distant lights of Scott Base from the hill's peak and carrying the ice axe that the mountaineer had signed.

Events are also being held in New Zealand and London to mark the anniversary.

Sir Ed's son Peter Hillary is speaking at anniversary celebrations on Wednesday at the Royal Geographical Society in London.

He said the world's leading mountaineers will gather to remember the climb, and the Queen and the patron of the 1953 expedition, the Duke of Edinburgh, will attend. The son of Tenzing Norgay will speak at the event.

Mr Hillary says the Everest climb is seen as one of the great hallmarks of humanity, by pushing the envelope of what people can achieve.

Auckland Museum is hosting an event on Wednesday evening in which Sir Ed's daughter Sarah Hillary and mountaineer Peter Cammell will be guest speakers.