A man who desperately tried to free a woman whose wheelchair was stuck on a rail track in Auckland says she was dragged along the tracks by the train after it struck her.

Several people tried to help the woman, who is in her 20s, get clear of the approaching train at the Morningside level crossing just after 9am on Monday.

The woman is now in a critical condition in Auckland Hospital. 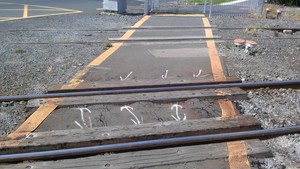 The scene of the accident. Photo: RNZ

Matthieu Merea, who witnesses described as superman as he swooped in to save the woman, says he and a female jogger who was running past tried several times to move her from the tracks, but couldn't.

He says as the alarm bells started to ring, he managed to just get out of harms way.

Mr Merea says it was only a second before the train was about to hit them.

"We managed to just push her on the ground, there was no chance to see if she was actually free of the tracks, but unfortunately she got dragged with her wheelchair, well the wheelchair got hit by the train which dragged her along."

Mr Merea says he is in disbelief at how close he was to being hit by the train and says he is extremely lucky.

One of the people who went to her aid is also in Auckland Hospital and is being treated for minor injuries.

Other wheelchair users have had problems at crossing

The accident happened on an undulating footpath that passes over at least three sets of tracks.

KiwiRail says there have been previous incidents at the scene and it upgraded the tracks last year.

Local ward councillor Cathy Casey says she is shocked to think people in wheelchairs could be at risk at train crossings.

She says safety measures such as barrier arms and warning bells aren't enough, as they are often ignored.

KiwiRail says the incident with the wheelchair becoming stuck on the tracks is an unusual event that has never happened in New Zealand before.

The company's chief executive Jim Quinn says a full investigation is underway which will determine whether the gaps, which should be around 69 millimetres, are too wide.

Mr Quinn says staff will be at the crossing on Monday night to check if there are any problems with people in wheelchairs passing the tracks.

But the chair of Auckland Council's disability strategic advisory group says several other people have become stuck in their wheelchairs at the Morningside level crossing.

Huhana Hickey, who chairs the disability strategic advisory group on the Auckland Council, says she has the same wheelchair and it does get stuck in nooks and crannies.

Dr Hickey says three or four people have told her they have had trouble at the Morningside crossing.