Christchurch schools are preparing for a last-ditch fight after learning that the Government still wants to close or merge them.

The Government on Monday announced it wants to close seven schools in the region and merge 12 others as part of a $1 billion reorganisation in the wake of the Canterbury earthquakes and subsequent population movement.

Education Minister Hekia Parata outlined interim decisions for 31 schools after considering submissions on the Government's original plan to close or merge them, announced in September last year. Each school was told in on Monday morning before the public announcement was made at midday.

Signs of protest were already on show at some of the schools threatened with closure. At one, students had written signs reading: "Save our school"; while at another, tearful parents spoke angrily against the Government's decision to close it.

Principals say the Government has ignored submissions made after the September announcement, but the Government maintains it has listened and dropped plans to close or merge 12 other schools.

Education Minister Hekia Parata told Radio New Zealand's Checkpoint programme on Monday the decision was made to close some schools by the end of this year instead of 2014 or 2015 to give people certainty, and was a result of consultation with schools and parents.

"We listened to what they've said and we changed the process for the announcements I've made today off the back of listening to them. And we propose to continue to work with them as we take the next step."

Ms Parata said the boards of the seven schools earmarked for closure and 12 schools planned for merger have until 28 March to provide any further information before a final decision is made in May. Radio New Zealand's education correspondent reports it is clear that many schools intend to do this.

The minister said interim decisions for the schools set to close affect about 670 children or less than 1% of the entire student population in greater Christchurch of nearly 72,000. The closures are set to take place from the end of this year.

Prime Minister John Key on Monday acknowledged that the closures or mergers would be hard for parents and children. He said they had not been easy decisions to make, but assured families they would be supported throughout the process.

Branston Intermediate principal Jennifer O'Leary is angry that her school is to close at the end of this year after being told it would stay open until the end of 2014. 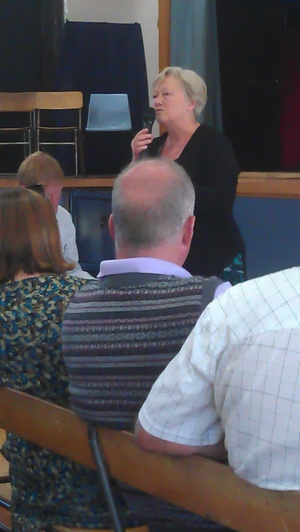 Jennifer O'Leary says the school will work hard to get the decision overturned. Photo: RNZ

The Education Ministry last year gave assurances that the school would remain open, but on Monday the intermediate was told of its planned closure at the end of this year.

Ms O'Leary said the closure is not about 21st century learning, but about money.

"We had given parents assurances based on the ministry's assurances that if they enrolled here this year they would be able to finish their whole intermediate time at our school.

"I'm angry, furious about that particular decision. We'll be working very hard to get that overturned, as well as of course appealing against the decision to close."

About 100 parents met at the school to voice their shock at plans to move the closure forward by a year.

Merin Ruri said she enrolled her son this year at the school where she had attended in the belief that he would see out the two years at the intermediate and is "extremely disappointed" that won't happen. She said she is angry the ministry is not following through with their word. "We've not got a lot of options and, really, not a lot of answers."

About 200 pupils at the school are expected to move to Hornby High School in 2014.

Meanwhile, the principal of a school saved from closure says the ministry could have saved schools a lot of stress by asking them for proposals to rationalise the region's schools.

Burnside Primary principal Matt Bateman says if it had asked his school to come up with a plan, it would have done so.

"Our proposal wouldn't have been too much different and it would have saved our community and our board and my staff six months of stress. We're really appreciative of the position we're in now, but the picture that was painted of our situation back in September was incorrect."