Prime Minister John Key has returned three of the world's most famous bottles of whisky to Antarctica.

The bottles were found under ice at the hut of polar explorer Sir Ernest Shackleton in 2007.

They were sent to New Zealand to be thawed before being taken back to their Scottish creators who were able to recreate the liquor. 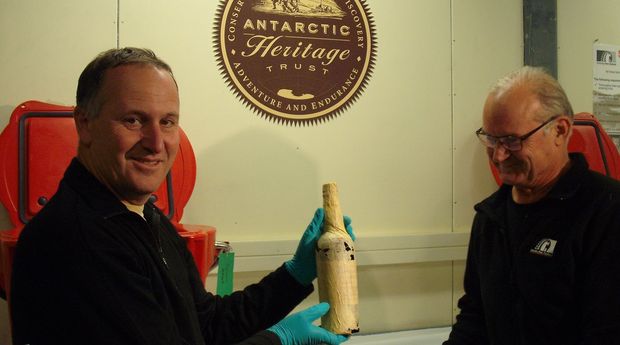 Mr Key described the bottles as a remarkable time capsule as he handed the whisky back to the Antarctic Heritage Trust on Saturday. The trust will return the bottles to Shackleton's hut.

The whisky had been encased in ice for for more than 100 years. Photo: RNZ

The Prime Minister said the bottles give a clue to the brave people who originally made it to Antarctica.

"I think all of us ... can imagine what it might have been like one hundred-odd years ago, sitting around, not really knowing what was happening next, with no communication, and yet probably sharing a few stories about what had gone on over a whisky."

Mr Key and Ngai Tahu leaders on Sunday unveiled a pou and a new sign for Scott Base.