The police say charges could potentially be laid after a West Auckland family was poisoned by carbon monoxide in their home.

Two children and three adults are in a stable condition in North Shore Hospital after a petrol generator filled their under-construction Massey house with the colourless, odourless and tasteless fumes from the gas on Sunday night. 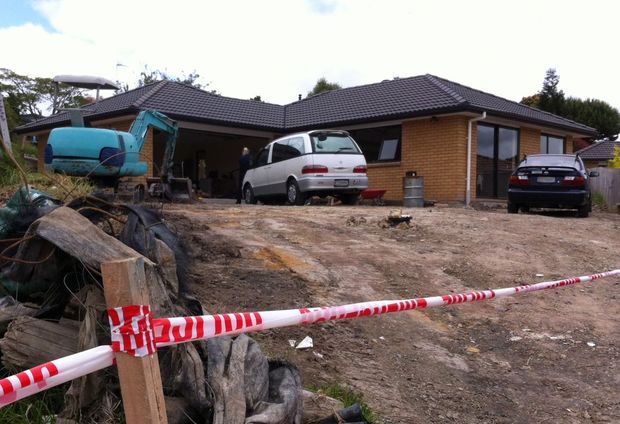 Police confirmed the property did not have electricity connected. Photo: RNZ

Detective Sergeant Peter Litherland says police will look at whether there was an unacceptable degree of risk.

"Obviously anyone whose utilising or employing mechanical equipment must ensure that satisfactory precautions are taken to ensure that there's not risk."

He says investigators will look at what ventilation was being used and whether a lack of ventilation contributed to the poisoning. He says some generators should not be used in the confined space of a house.

Emergency services were alerted by a family friend called to the house on Sunday night by one of the occupants when they began to feel unwell. The friend found the victims semi-conscious.

Ambulance and fire crews were called to the property at 12.20am on Monday.

Fire Service spokesperson Nicole Bernard says the victims were semi-conscious and vomiting and oxygen was given to them before they were taken to hospital.

The generator was being used in an attached garage because power was not connected to the property.

Electricity company Powershop says it failed to connect electricity to the home before the family moved in.

Chief executive Ari Sargent says the family requested power be connected before they moved in on Friday, but an administration oversight meant that did not happen.

Mr Sargent says his staff raced around to find an available certified contractor to connect the home, but it was not possible.

He says the company offered to put the family up in a hotel or motel but they chose not to take this up.

Lines company Vector says it was instructed to connect the property to electricity on Friday, and had planned to do it by Monday.

A neighbour says he heard screams coming from the house before emergency services arrived.

Ian Campbell says the family moved into the house on Sunday and asked to connect a power lead to his home to run electricity, but he declined.

He says he heard a woman scream just before midnight, during what he thought was an argument.

Mr Campbell says what has happened is shocking and sad and he wishes he could have done more to help.

Radio New Zealand's reporter at the scene says the house is a construction site and has piles of rubbish and a digger on site. A hazardous materials team has been at the property, which is cordoned off by police.