Mt Tongariro has stopped spewing ash, but scientists warn that there is now a higher probability of more eruptions in the next few months. 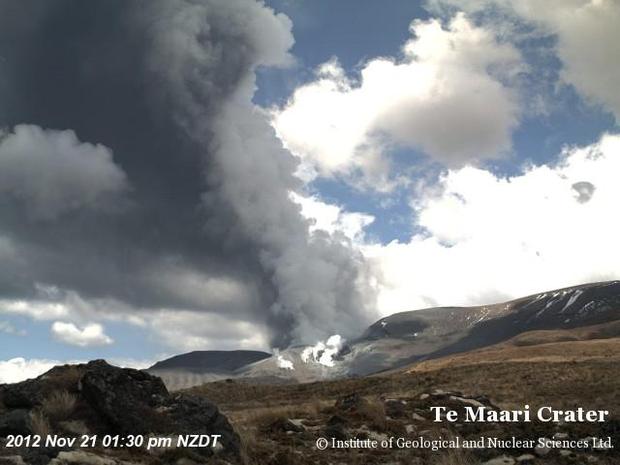 A picture posted on Twitter by a GNS scientist shows ash and steam pouring from a crater high on the mountain's slopes, and it travelled as high as 4km.

Air New Zealand has cancelled flights to or from Taupo, Rotorua and Gisborne airports on Thursday morning.

Police and the Department of Conservation say there have been no injuries or loss of life as a result of the latest eruption but people did have to scramble off the mountain to ensure their safety. 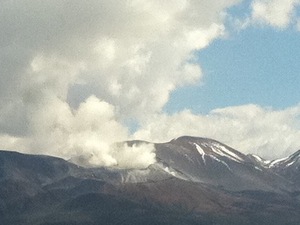 Volcanologist Tony Hurst says after comparing notes with other scientists that there is a much higher probability of more events like Wednesday's eruption in the next few months.

Dr Hurst says there was no warning in terms of seismicity before the mountain sent up a plume of ash early this afternoon.

He says the eruption in the Te Maari craters may have occurred in a place that was a vent from the previous eruption in August.

Dr Hurst says the first alert on GNS seismographs was in fact the explosion.

Department of Conservation officials say the area around Mount Tongariro remains closed to the public while they decide - with help from GNS Science - when it will be safe for the public be able to return to the slopes.

DoC's Ruapehu area manager, Jonathan Maxwell, says DoC and GNS scientists were in a helicopter near the area at the time and able to quickly assess what was happening.

Mr Maxwell says DoC staff ensured the people on the mountain when the blast occurred got off quickly, some via emergency exit routes.

Gulf Harbour School principal John Petrie was with some of the children who were on the crossing about 2km from the eruption, and says that party made a quick exit.

They were among were more than 100 school children on the Tongariro Crossing at the time.

David Insull was part of a film crew shooting a tourism video at the top of the mountain just as it blew, and says he had a spectacular view, but found the eruption a little scary.

A helicopter pilot who witnessed the eruption says there were people on the mountainside at the time.

Helicopter Services Bay of Plenty pilot John Funnell was flying over Mount Ruapehu when Tongariro erupted around the Te Maari craters on its northern side.

He says he could see up to 20 people on the ground by the Ketetahi hut on Tongariro's northern slopes, but they didn't appear to be concerned.

Mr Funnell later said some ash was starting to spread as it was caught by high-altitude winds, but he could also see ash on the ground.

Civil Defence managers say light volcanic ash fall can be anticipated downwind of Tongariro and Civil Aviation warned any planes near the eruption to fly over or around the ash cloud.

Air New Zealand says some flights operating to airports east of Mount Tongariro may be delayed or cancelled as a result of the eruption.

A woman who lives near Mt Tongariro says that as the mountain erupted a huge ash cloud was floating over the area.

Robyn Bennett says the ash fell around her home, but says residents in the area are keeping an eye out and making sure others are safe.

Another resident who works near Mt Tongariro says steam was still coming from the volcano several hours after the initial eruption on Wednesday.

Tania McKinlay from Discovery Lodge was going to pick up some trampers when she looked up and saw steam coming from the mountain.

Suddenly a huge amount of ash came out and shot a long way into the sky, she says.

A local man, Clint Green was driving from Taupo to Turangi when the eruption happened.

He told Afternoons with Jim Mora that he just glanced up at the mountain, as he usually does on the drive.

"And all of a sudden a towering black plume coming out of Te Maari just began erupting very, very quickly skyrocketing up and at first I didn't believe what I was seeing.

"Clouds of steam are still billowing from the eruption site," he says.

"The eruption is centred on the north-west slopes of Mt Tongariro ... the clouds spewing from the eruption site a white and grey and rise high into the sky before thinning and drifting away".

The road from Tokaanu to Lake Rotoaira, state highway 47, remains open and tourists are taking the opportunity to stop and look at the eruption as it unfolds.

It is the second eruption on the mountain this year - Mt Tongariro erupted at 11.50pm on 6 August.

That eruption widened and deepened the crater and re-activated vents which had been covered up in the 116 years since its last previous eruption started in 1896 and finished in 1897.