A Glen Innes resident group protesting against plans to remove state houses is rejecting Housing New Zealand's statement that all tenants who have left the area chose to move.

Six people, including the Mana Party leader Hone Harawira, were charged early on Friday after a heated demonstration against a plan to remove 156 houses from the Auckland suburb. 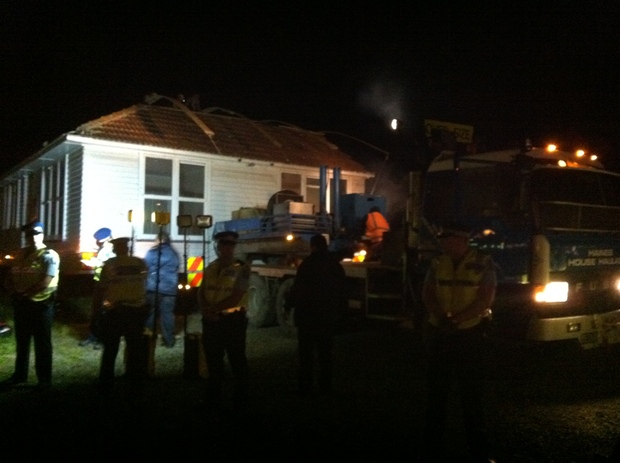 The house being moved under police guard. Photo: RNZ

Housing New Zealand says 260 houses will be rebuilt. Some will be state homes and others will be sold privately.

The agency says the protest action is disappointing and all 70 tenants who have moved to date chose to relocate to another house voluntarily.

A member of the Tamaki Housing Group, Sue Henry, says a number of people have felt threatened by Housing New Zealand and have not really had a choice.

The six charged after the protest will appear in Auckland District Court next Wednesday.

Mr Harawira and other protesters were arrested late on Thursday night after the occupation of a state house that had been taken from Glen Innes to Mt Wellington.

A witness said Mr Harawira had locked himself in his car in front of the removal truck and police had to break into the vehicle to pull him out. At one stage, three protesters were sitting on the roof of the house and another two were inside the ceiling.

Police said they made several appeals to the protesters to move away from the house, but were ultimately left with no option but to make arrests.

Mr Harawira told Morning Report on Friday he was not expecting the demonstration to end in this way.