Maori have voted at a national hui to stand united over the issue of water rights and support court action if all else fails.

The hui in the Waikato town of Ngaruawahia was called by the Maori King, Tuheitia, and prompted by the Government's decision to speak to selected iwi separately ahead of its partial sale of state-owned Mighty River Power. 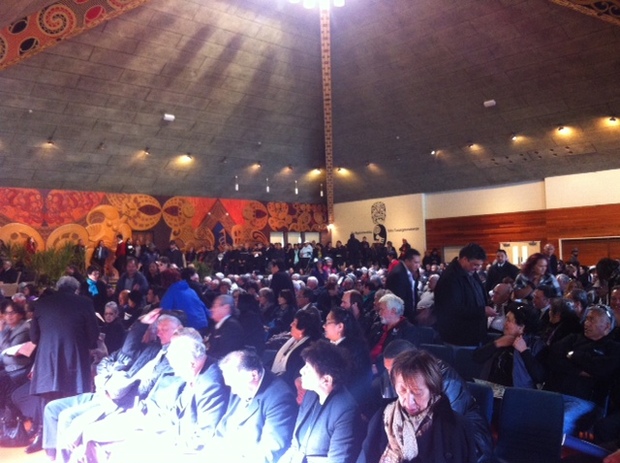 The hui was told Maori would not stop until they resolved what is an outstanding grievance. Photo: RNZ

At least 1000 people attended the meeting at Turangawaewae Marae on Thursday where chairperson Tukoroirangi Morgan said water rights is a defining issue for Maori.

A group will be formed to represent all Maori to negotiate with the Crown. The hui voted to act quickly before any shares are sold in state-owned power companies, and before any iwi or hapu decide to go it alone and enter negotiations with the Crown.

Mr Morgan said the emphasis has been on collaboration. "A joint approach, a shared approach and we will not resile from that position."

He said Maori would not stop until they resolved what is an outstanding grievance. "So as long as it takes, we are here. Understand that the elections are coming; we're still here on this side of the table - the Government may not be."

The Maori King, Tuheitia, said Maori have fought with the Crown in the past over other issues and have won - and water will be no different. He said the ultimate goal for iwi is to retain management and control of water, or the power to allocate it.

"We now gather in preparation for another battle. It will not be easy - great challenges are never."

In his closing speech on Thursday, King Tuheitia criticised what he called "Pakeha law", saying it minimises mana and has stripped iwi of all things important to their well-being, such as water and its spiritual associations with Maori. He challenged the audience to commit and unite to protect their rights and interests.

The resolution from the hui will be taken to all iwi and hapu for consideration before negotiations begin. The hui agreed that if negotiations with the Crown are unsuccessful, then full support will be given to the Maori Council in any court battle.

Among those present at the hui were Maori Affairs Minister Pita Sharples, MPs from other parties except National, iwi leaders, the Maori Council and ordinary people - both Maori and Pakeha.

Dr Sharples, who is also co-leader of the Maori Party, said the big turnout showed that Maori want to create a structure whereby all iwi interests are pursued. He said each group may want different structures and was expecting a good outcome.

Maori leaders will meet at Ngaruawahia on Friday.

Other speakers at the hui also left the Government in no doubt where Maori stand on the issue.

Activist, lawyer and Mana Party president Annette Sykes made it plain that any sale of state-owned assets should be halted for good - not just deferred. Ms Sykes said Maori need their own solutions to the issue of water rights decided upon across all iwi, hapu and whanau.

The paramount chief of Tuwharetoa said Maori rights, interest and responsibilities go far beyond the sale of shares in hydro-power generators.

Sir Tumu te Heuheu said the economic benefits from the use of water have to be fairly shared and solutions on the use of water need to be meaningful to every marae, because water is an inseparable part of Maori whakapapa and identity.

The leader of Ngapuhi said water rights is the most important thing since his tribe signed the Treaty of Waitangi in 1840 and urged iwi and and the Maori Council to work together and not run the risk of being divided by the Government.

Sonny Tau challenged a number of politicians in the audience, calling on MPs to stop what he called political cannibalism - saying they had an insatiable appetite for Maori flesh and to stop feeding the country's cultural invaders.

Ngai Tahu chair Mark Solomon said he came to the hui with an open mind and an open heart. He said all iwi need to form a collaborative approach to protect tangata whenua water rights.

Govt to listen to 'genuine rights and interests'

Prime Minister John Key said on Thursday the Government would only listen to genuine rights and interests regarding water. He would not directly say whether whether he would act on any recommendations from the hui.

"Because someone claims they have a right or an interest, doesn't mean the Crown's going to necessarily recognise that right or interest.

"They're quite free to suggest they have that right or interest, but it's for the Government to recognise what it believes are genuine rights and interests."

No MPs from the National Party attended the hui.